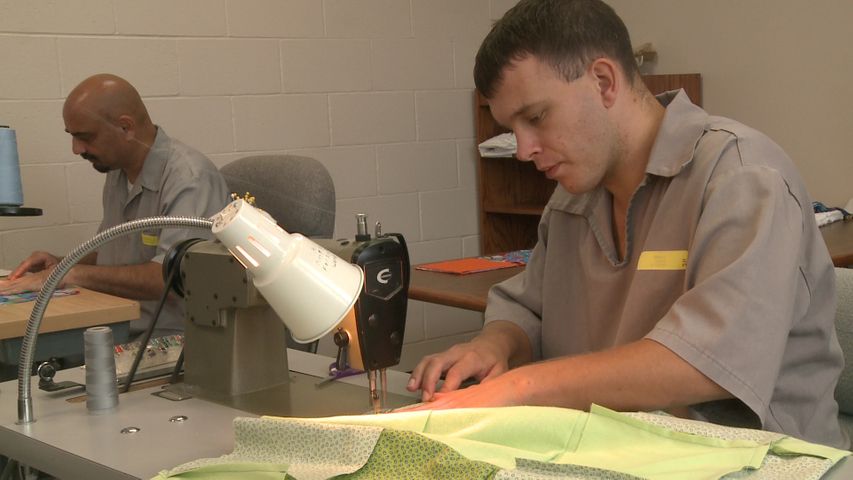 COLE COUNTY - Richard Rulo has been in the Restorative Justice program at the Jefferson City Correctional center for about seven months, and Wednesday he gave back to the community. Rulo and about 30 other inmates made Christmas stockings through the Missouri Department of Corrections' "Fill Their Stockings" project.

"I'm realizing that my old ways weren't working." Rulo said. "This is a way to give back and to help people realize that I can be a productive member of society."

The department is donating the stockings to three area food banks. The Samaritan Center, Serve Inc. and the Food Bank for Central and Northeast Missouri can then sell the stockings to raise money for their own organizations.

Prisoners made stockings for the first time last year. The Samaritan Center's Children's Christmas Fund raised about $2,000 and the Food Bank for Central and Northeast Missouri raised about $6,800.

Prisoners in the Restorative Justice program work on projects like "Fill Their Stockings." The program has also produced other sewing projects, such as donating quilts and pillows to the Joplin relief effort.

"Not one tax payer dollar goes toward Restorative Justice programs," Chris Cline, communications director for the Department of Corrections, said. "Restorative Justice focuses on the victim. It gives offenders the opportunity to give back to society and repay some of the harm they've caused in one small way."

The Department of Corrections said prisoners will continue to work on this project until Christmas. They have already donated 55 stockings since the program began in September.