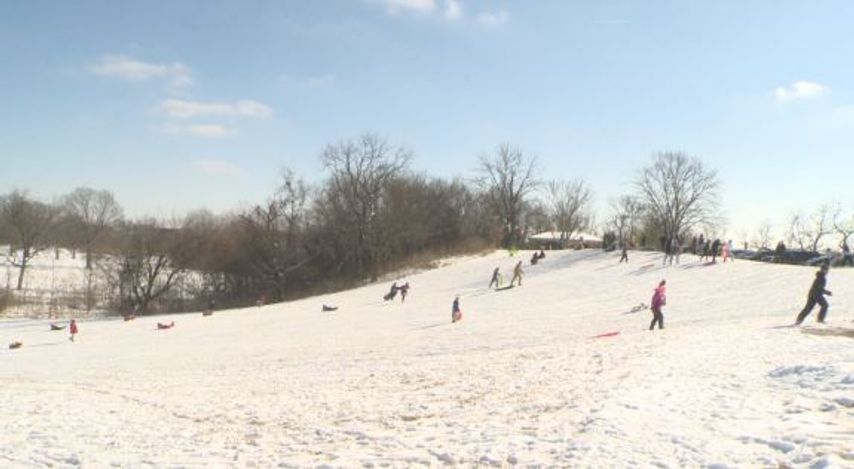 Jacob Stevens, a sophomore at Calvary Lutheran High School in Jefferson City, came out to the park to do some sledding. He also found a shopping cart along with his brother and a friend.

"We decided to take it down the hill a few times," Stevens said. "I went first, just started going down, and trying different things with it."

Micah Stevens, brother to Jacob Stevens and an eighth grader at Oakland Middle School in Columbia, said the shopping cart is a lot of fun.

"I haven't tried it, though" Stevens said. "I have basketball."

Stevens said he has basketball practice and games later, so he chose not to go down the hill at the park in the shopping cart so he wouldn't get hurt. He said going sledding down the hill is a lot of fun and hopes for more snow days.

Corben Simar, a friend to the Stevens brothers and a freshman at Muriel Battle High School in Columbia, expressed how much guts it takes to go down a snowy hill in a shopping cart.

"You just have to have confidence to do it," Simar said. "[It's] a little dangerous, but it's a lot of fun."

Simar smiled as he said he's not worried that much about his parents telling him not to go down the hill in the shopping cart. Simar also expressed great joy as this is his first snow day of the year.

"[Feels] very good," Simar said. "Take a break from work and stuff and have fun."

Kellie Austene, a guidance counselor at Hallsville High School, said of course she's happy she and her kids got today off.

"We planned to come here today," Austene said. "It's nice to have the unplanned days off."

Austene said she was grateful this was not one of those snow days where you had to stay inside from freezing temperatures, ice, etc.

"We're very fortunate that we have four-wheel drive," Austene said. "Today, it's not terribly cold, so they can just put their coats and gloves on and be able top get outside and play instead of sitting around playing video games all day. It's very nice."