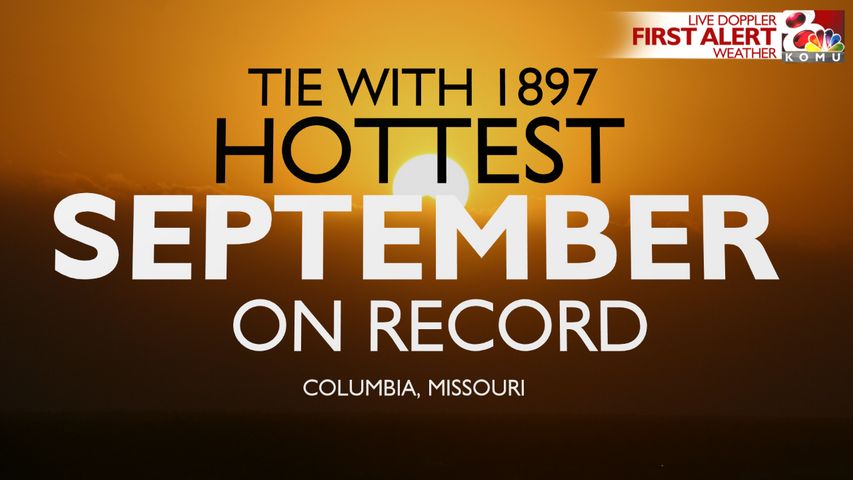 COLUMBIA - The warmest September mid-Missourians will be able to remember just occurred. This is because no one from the 1800s is alive today, and the last time Columbia recorded a September as warm as 2019's was in 1897, a difference of 122 years. However, there are major differences in how both September 1897 and 2019 came to be at the top of the record book.

The month started with three days in the 100s (for actual temperatures, not counting for the heat index). In fact, a total of four days were in the 100s. Still to this day the month holds six high temperature records. There was a cool period that lasted seven days from the 16th to the 22nd when temperatures were either seasonal or below average. During that time, one morning recorded a low of 35º, which still holds the record low for that date. So, you can see, there were large swings in the temperatures throughout the month.

It was a very dry month. A half-inch of rainfall is all that recorded, and that fell over a consecutive 48-hour period in the middle of the month. Every other day was dry.

The only below average day was felt on the first day of the month. The end of August was below average and that carried over into September for one day. Then, everything changed. The remainder of the month experienced above average temperatures with the exception of eight days which were seasonal. While a low temperature was not broken, a highest low temperature was. The last day of the month recorded a low of 69º, which bested the previous 68º highest low from 1971. However, there were zero 100-degree days. In fact, the warmest temperature felt in 2019 as a whole was 95º.

It was a below average month for precipitation with only 2.52" falling over the Columbia weather station, which left the month 1.35" below the 3.87" average.

The month also saw very little influence from frontal systems. The jet stream, our upper-level winds that tend to steer low-pressure systems our way from the Rocky Mountains, was well north of us. Because of this, nothing was able to stop our continued Summer. Showers every now and then, along with clouds, helped to keep temperatures steadily in the 80s and 90s; playing a role in keeping our low temperatures so warm, too. The steady southerly flow didn't hurt, either.

So, if 1987 had multiple 100-degree days and still holds records and 2019 has zero high temperature records, how are they tied for first place?

A note on low temperatures: one of the trends we have been seeing prominently in climate has been warmer nights. Since 1970, Columbia's low temperature is, on average, 2.4º warmer.

A reminder that our nights have been warming. It was actually one of the first things I noticed myself after forecasting and looking at mid-MO weather steadily for a few years. Nights are often more above avg. than days. That's a big reason Sept. 2019 tied Sept. 1897 as hottest. pic.twitter.com/gSBwoIQIYm

While summer has held on, Fall weather should finally arrive by the end of the week as the coolest temps since May move into mid-MO.

A conversation with the Missouri State Climatologist about climate trends

UPDATE: MAY 2018 is the hottest on record