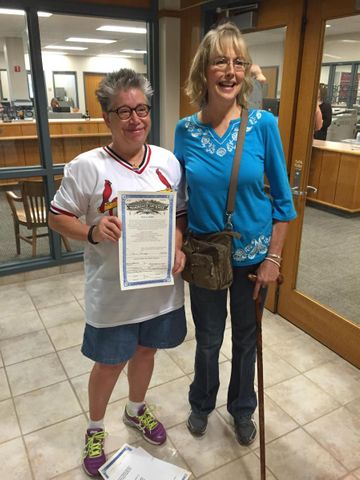 COLUMBIA - Boone County has issued 12 marriage licenses to same-sex couples in the 12 days since the Supreme Court ruling.

"Having been together for 17 years, marriage was a step we couldn't take," Perry said. "So we hadn't really talked about it, but it just seemed right."

Perrin said she sent Perry a text after the ruling was announced and asked if she could step away from work to go apply and get their marriage license.

When asked what had changed since they said their vows, both answered with the same response: "Not much."

Perrin said, "It legitimizes our relationship. We've been together for 17 years, and now it's officially recognized. So that's important."

On the day of their marriage, the couple walked from the Recorder of Deeds office to the county courthouse, where judges were on stand-by to perform any impromptu ceremonies, like theirs.

Cole and Callaway counties have issued one license each to same-sex couples. Randolph and Moniteau counties are prepared for applications but have not received any to date.

Perry and Perrin said they plan on having a religious ceremony at Unity in Columbia, a church both were involved in prior to meeting. It's actually how they met.

"I was new to town and was familiar with Unity, and there was one here in town on 8th street, so I went in and attended for a few weeks," Perrin said. "They had a pot lock at lunch one day, and there was this fabulous spicy black bean salad, and being from Texas I like it spicy. So I asked, 'Who made this?'"

It was Perry's recipe.

"I asked for the recipe," Perrin said. "Well I had to ask her for it probably four or five times, and I finally got the recipe, and her."

Reverend Sandra Butler of Unity said the couple has been active within the church, which is founded on service to all community members.

Perry said, "It's a place where we both feel comfortable."

The Supreme Court ruling has a 25 day window to allow for procedural changes before all municipalities must offer marriage licenses to same-sex couples. That window ends July 20.