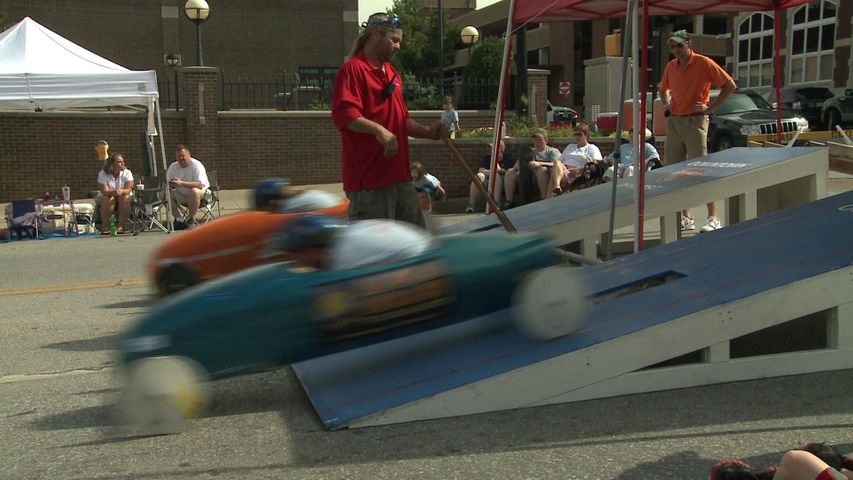 COLUMBIA - Mid-Missouri's Soap Box Derby was held Sunday in downtown Columbia. Four blocks of Broadway, from Seventh Street to Providence, were closed off to transform the street into a racetrack.

Racers spent huge amounts of time preparing for this event.

"Usually it takes at least a couple of weeks," said Ross Mutrux, a car sponsor.

Broadway is an uneven street, so drivers raced down twice; once on the left side and once on the right side. The difference between the two times determined the winner. Contestants raced in either Stock or Super Stock, depending on their age and weight.

"All of our drivers get trophies," said Publicity Director Rick McKernan. "But the winners get pretty substantial trophies. They're about four feet tall."

In addition, winners from both the Stock and Super Stock categories get to travel to Akron, Ohio, for the All-American Soap Box Derby to compete with other local winners.

Ferguson attended last years national derby and said it was a lot of fun.

But the race is about more than just competition.

"We usually have a child that we try and sponsor to get the experience," said Mutrux. "The same experience that we had when we were children."

The weeks spent putting the car together are a great bonding experience for everyone involved.

"Kinda hanging out with the kids," said Matt Soper, a parent of one of the racers. "I think that's the best part."

The winners of this years race were Jordan Weltha in the Stock Division and Levi Slate in the Super Stock Division. They will go on to compete in Akron, Ohio, this July.

For more information on the Soap Box Derby, visit their website.