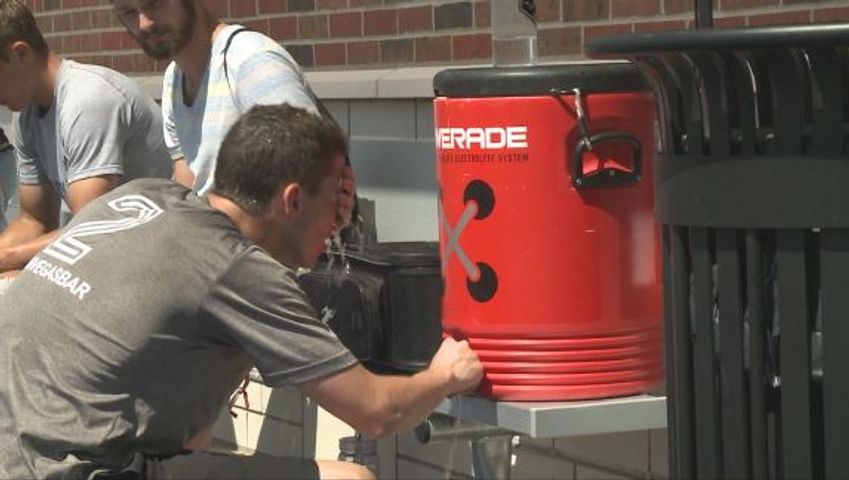 COLUMBIA — Heat and hydration go hand in hand as sports camps practice outside this summer. With the high temperatures, athletic programs are taking several precautions to keep kids cool and safe.

"We get the kids in and out all day long. Today no kid was out here longer than an hour," Klein said.

Klein also said the staff closely observes the athletes to watch for signs of heat-related issues.

"We were mainly concerned that they enjoy the week. There's 120 kids here this week, and there's 120 concerned parents. I'm a concerned parent as well, so we take these precautions because we don't want to put anyone's health at risk over heat," Klein said.

Cathy Eatherton, who takes her daughter to participate with the Columbia Track Club, said she considered not bringing her to Wednesday night's races because of the heat.

"I'll just let her know if she's not feeling well during the event to just stop and step off the track and let the other girls go by because it's not worth getting sick over," Eatherton said.

"Today, we are probably going to scale back the events so they don't have as many events to run," Hessler said.

Hessler used a thermometer to measure the temperature of the track before starting Wednesday night's program. The thermometer read a high of 122 degrees on the track.

He said despite the high track temperatures, they still want kids to enjoy participating in the races.

"I really feel totally responsible for the kids," Hessler said." But I don't want to make it such that theres no risks for these kids, I mean life's full of risks."