Mid-Missouri Village Celebrates Being in the Middle 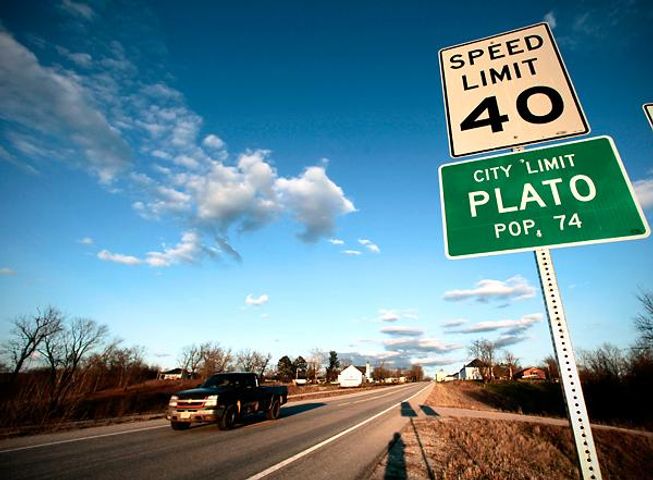 PLATO, Mo. - The United States Census Bureau celebrated the new population center of the country Monday. The new center of the U.S. is in Plato, Missouri. Plato is a village in Texas County consisting of 109 people. It is about two and a half hours south of Columbia. The center has been in Missouri every decade since 1980.

The village celebrated Monday with a large presentation unveiling the new monument marking the population center. There were many speakers including the director of the U.S. Census Bureau, and the village's mayor. The director, Robert Groves explained it.

"They are the center of the nation because this is the point at which the population balances perfectly," Groves said.

The mayor, Bob Briam, thought it was great to see the people that came.

"The most exciting thing really is to see everyone here," Briam said.

He said the best thing about living in his town is the people's attitudes.

"That feeling of friendship, we love strangers just as much as we do our own," Briam said.

Groves came into the village from Washington D.C. and was impressed.

"To give you a sense of the character of this place, the high school kids made up tee shirt designs and instead of pocketing the profits of those tee shirts, they are going to put it into a scholarship for the school," Groves said.

Kortney Reddell is in the high school speech class and she was the MC of the presentation. She knew this celebration was a big deal.

"It was nerve wracking because they kept telling us that the entire world was going to be watching," Reddell said.

She said the people are what make this village special.

"Everybody knows everyone, we all know everything that was going on. Everyone is really helpful and nice. My favorite part about living here is the people. Everyone is so nice, if you would be on the side of the road, they are going to stop and ask, what's wrong, you need help?" Reddell said.

According to Briam, most of the 109 residents of Plato were born and raised here. Patsy Niebruegge is one of these people. She has never seen anything like this in here town. She grew up in Plato.

"I went to country school, 8 grades in one room," Niebruegge said.

Another resident that grew up in the village thought the celebration was important.

"I am proud of our little community and to get this recognition I think is wonderful," Sidney Dandridge said.

Niebruegge added, "Our little town where I was raised, it's on the map now."