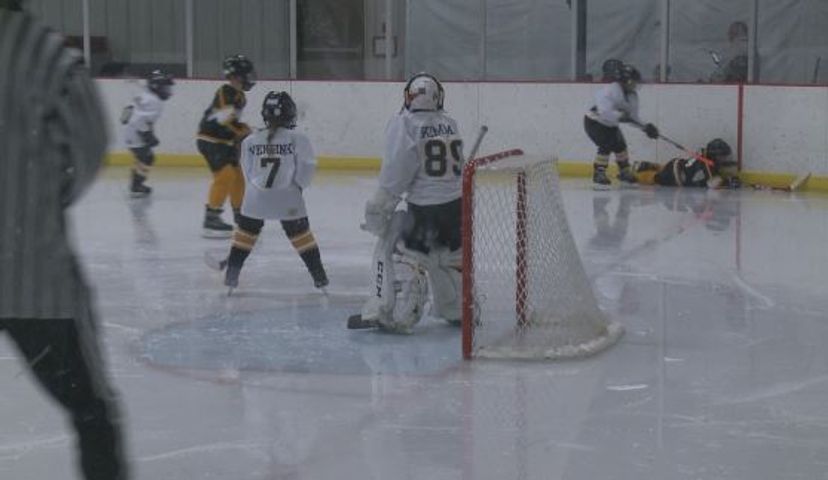 Tournament Director Jason Howe said this year teams came from the St. Louis and Kansas City areas and even Oklahoma. Players range from ages 4 to 8 and play in three different divisions.

Howe said several measures are in place to keep the young players safe from injuries.

"They all have protective equipment all certified by USA Hockey, they have pretty thick cushions inside their helmets, elbow pads, shoulder pads," Howe said. "We also have first aid responders here on sight."

Hockey parent Keith Eilerts from St. Peters said this is his son's first year playing hockey. He said the kids are taught how to play safe during practice.

"At practices we work on teaching the kids not to take cheap shots, they always have to have mouthguards in," Eilerts said. "So all the kids can be safe out there and they play fair."

Eilerts said he has never had concerns about his son getting hurt while playing hockey.

Another parent, Jessica Kimmel, said she had concerns about her son's safety when he first began.

"He was the only kid out there in breezers and the helmet with the full cage," Kimmel said.  "It was just something I was really worried about."

Kimmel said since her son has been playing, she has never had to deal with an injury.

"They are head-to-toe in safety gear," Kimmel said.

Players were able to watch a game between the Mizzou Tigers and the Kansas Jayhawks Saturday.

The tournament is expected to last all day Saturday and Sunday and will have a championship ceremony on Monday.