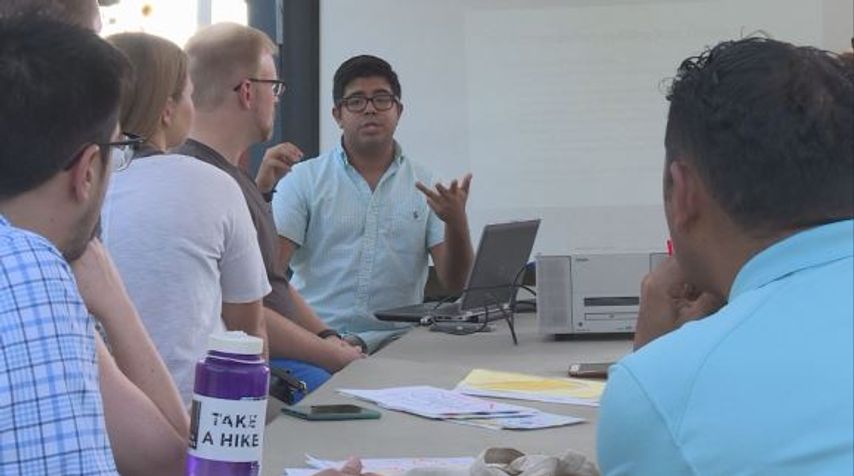 COLUMBIA - After volunteering at a detention center for women and children seeking asylum in the U.S., one Jefferson City man is sharing his experience around mid-Missouri of the women he met.

Secretary of State Mike Pompeo announced Monday the Trump administration is cutting the number of refugees the United States will accept to an all-time low of 30,000 people for 2019.

In the last year of former President Barack Obama's term, his administration set the cap at 110,000 refugees. When President Trump took office, he cut the number to 45,000.

Guerrero's family received asylum from Peru when he was two years old.

"It's kind of almost come full circle now that I am sort of experiencing or paying witness to the same fear that these families that we served down in Texas experienced," Guerrero said.

Timmerman said his emphasis in civil rights law and interest in immigration in America right now inspired him to research how he could help.

The two spent a week in Dilley, Texas, and assisted roughly a dozen women, listening to their stories of why they are fleeing their home countries.

Timmerman said the narrative he hears in America about immigration, refugees and people in detention centers, is not at all what he's come to find out.

''The fact that all these people are criminals? No, doesn't make sense. The fact that they're coming to take our jobs? No, that wasn't at all a part of my experience," Timmerman said. "The last thing they're thinking about is getting a job."

Pedro said one of the hardest parts was asking these women to recount in explicit detail the worst days of their lives.

Timmerman said, in order for the women and their children to gain asylum they have to make a "credible fear" or "reasonable  fear" for their life argument in front of a asylum officer who decides their fate.

In one case, Guerrero said, one woman he met was trying to appeal a previous deportation ruling.

"She laid out everything that you could possibly imagine, like repeated rape from multiple family members that were connected, to gangs," he said.

"They're running for their lives into the United States," Guerrero said.

Now, he is working on sharing the stories of his experience in Dilley so people can get a better grasp on the human beings behind the term deportation.

"After creating those strong bonds with those people knowing that they're probably being sent back to their death was one of the hardest things to face, because up until now I had never known an individual that had been deported for anything," he said.

Guerrero is working on giving presentations to various communities across mid-Missouri based on his experience in Texas.

"Race relations post Ferguson, the conversations that we see taking place are exclusively black and white. There's no room for other colors on that spectrum," he said.

Guerrero said bringing to light the issues that are taking place on the border will add Mexican and Latino communities to conversation about racial justice in Missouri.