Mid-Missourians Camp Out For Chick-fil-A Opening 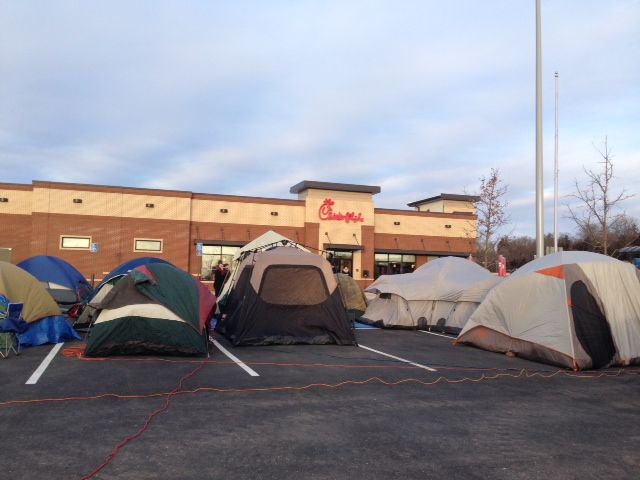 The new restaurant will open Thursday morning at 6:30 and become the 28th Chick-fil-A in Missouri. It will be the only one in mid-Missouri.

Chick-fil-A management is registering the first 100 people to show up. Those people will get free Chick-fil-A food once a week for a year. By 2:00 p.m. Wednesday, 70 people had already arrived, bringing tents, plenty of clothing and games to pass the time overnight.

Mark Dicicco drove two hours from O'Fallon, Mo to be a part of the experience. He said he is ready for the challenge of the cold weather expected through the night.

"I enjoy the competitiveness of trying to endure the weather and be one of the first 100," Dicicco said.

Chick-fil-A fan Travis Roberts got to the restaurant at 5:30 a.m. Wednesday and had his dad bring him necessities throughout the day. Roberts said he's been waiting for a Chick-fil-A since he moved to Jefferson City 12 years ago.

"I feel blessed to be a part of this, this is God's fast food," Roberts said. "I love it."

Chick-fil-A will continue doing line checks throughout the day and night in order to make sure the 100 people do not leave the restaurant. If they do, they will be disqualified from getting their free meals.