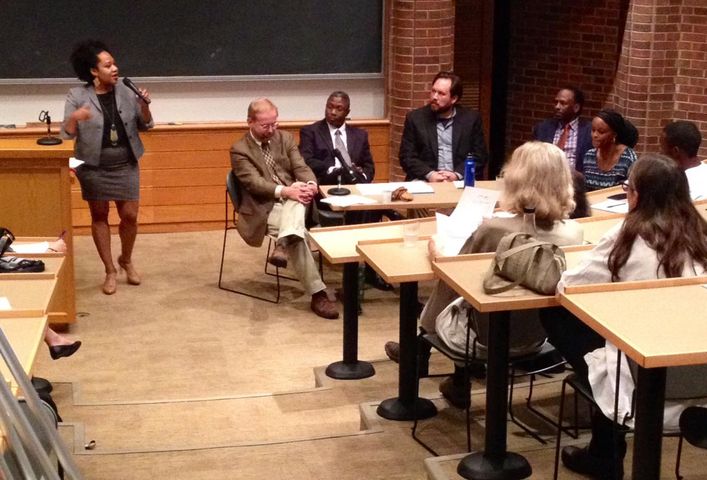 COLUMBIA- On the one-month mark of the shooting death of Michael Brown in Ferguson, MU hosted a forum Tuesday where experts and the community discussed several issues that came up from the incident.

"To have a forum to be able to talk about the fact that this could happen here, this has happened here, and could happen in any city in the state I think is a good starting place," said Katie Jansen, a Columbia resident. "I think it's a place for the community to come together and be with each other about what's been going on."

Jansen said it is important to create forums where people can openly discuss issues of race.

"I think one of the reasons that racism is allowed to persist the way that it is, is because we've been taught not to talk about it," she said. "It's too uncomfortable. It's too risky, so it continues to be a problem because half the time, especially as white people, we don't even notice it."

Jensen also said it is important to have opportunities to talk about issues of race and racism in one-on-one settings.

The discussion touched on issues like the role of the media in situations like the one in Ferguson and put that in a greater historical context. Panelists and attendees also talked about violence and community involvement.

The panel also discussed how social media played a role in the case. It said tweets and other posts on social media web sites spearheaded interest in the case, which in turn led to greater media coverage.

"Well I think this helps," Rev. C.W. Dawson said. "I think it starts the movement toward a serious discussion about race, about class, about gender, that needs to take place in this country."

Dawson said he decided to attend the event because the issue hit home with him and says forums like this one will help people feel more comfortable discussing issues regarding race.

"This issue about Ferguson is one issue that affects me personally, affects the people I represent in the community I live in, and a discussion needs to take place, and I'm glad I was able to take part in that," he said.

Dawson said for this event to be successful, the words spoken need to turn into action.

"We need to learn how to address the conditions, the material conditions that cause something like Ferguson to happen," he said. "If we're not willing to do that, then this was just intellectual fantasy."

He said he was encouraged when he saw it wasn't just people from the MU attending the forum, but also people from around the community showed up to join the discussion.