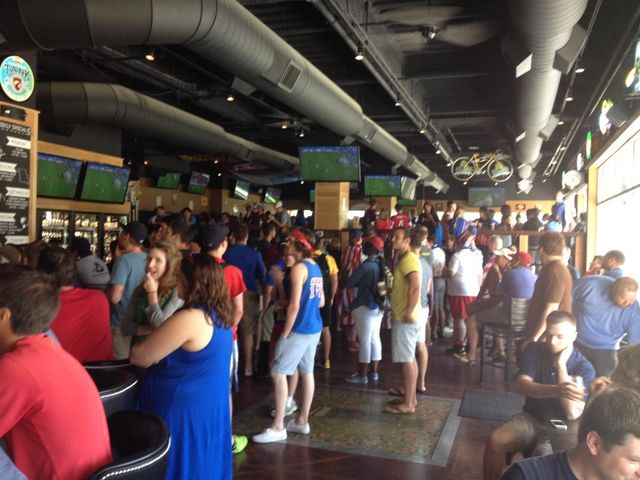 COLUMBIA - Mid-Missourians came out to the bars early Thursday to cheer on the U.S. Men's National Team against Germany regardless of whether they had to work.

Jon Whitaker is the manager at the International Tap House in downtown Columbia. He said he wasn't sure what kind of crowd would show up at his bar for Thursday's match.

"I wasn't 100 percent sure because it is 11 a.m., students are gone and the people that are in town generally have nine to five jobs," Whitaker said. "But we had people at 9:45 waiting to get in the bar."

The U.S. soccer team may have helped downtown businesses get people to the bars. The team tweeted a get out of work note, explaining the team needs the country's full support. The note is signed by the U.S. head coach Jurgen Klinsmann, who is from Germany. Columbia fan Evan Helmuth said he used the note to get out of work Thursday.

"My boss took it well. He thought it was funny," Helmuth said. "This is a big deal, I think it's worth knocking off work for."

Helmuth said he expected a big crowd to watch the game.

"I thought there would be quite a few people ditching work. I didn't think I was going to be alone."

Whitaker said if he were a boss in a different setting, he would let his employees watch the game.

"As a big soccer fan myself, this is one of the most important sporting events for me personally in the last three or four years," Whitaker said.

Whitaker said he was pleased with Thursday's crowd, but he's had more people in attendance before.

"It wasn't quite what we saw for the Portugal match a few days ago, but I'm really happy," Whitaker said. "It came through and it was really nice to see."

Whitaker said he loves seeing people from all over the country come together for a common cause.

"We're all the same team - Kansas City, Chicago, St. Louis, wherever - We're all USA fans. That's why I say I believe that we will win because 'we,' we are the USA."

Germany beat the U.S. 1-0 Thursday, but the U.S. still advanced to the knockout round by means of goal differential thanks to Portugal's larger loss to Germany.