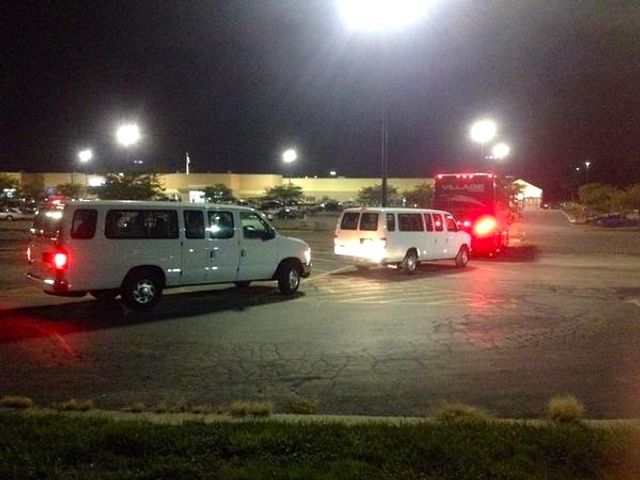 COLUMBIA - As they waited anxiously for the bus from Kansas City just before 9 p.m. on Friday, Chloe Jackson and Josh Ellermann worked quickly to cut and tear an old t-shirt into strips. It looked as if they were preparing a tourniquet for an injured friend.

Jackson and Ellermann, both students at Truman State University, were instead making what they called "climate ribbons" in preparation for the People's Climate March in New York City on Sept. 21. They would join a caravan of about 75 citizens from Missouri and Kansas on the 34-hour trip.

Jackson said participants were asked to write on ribbons the things they love most in their lives that they do not want to lose because of climate change.

"Climate change is one of the biggest issues of our time," Jackson said. "I wish more people in the U.S. cared enough to do something about it."

She will be one of an estimated 100,000 people attending the march. That would make the People's Climate March the largest climate march in history, its organizers say. The event comes as leaders from around the world descend on New York City for the U.N. Climate Summit on Sept. 23.

Carolyn Amparan, publicity chair for the Osage Group of the Sierra Club, said she believes feet on the ground are a critical part of the fight against climate change.

"I do believe most social movements have had to have people take to the streets to make change," Amparan said.

As she boarded the bus in Columbia, she carried a sign in the shape of Missouri with the message, "MORE CLEAN ENERGY NOW." Her sign reflected the hope marchers have that fossil fuel use can be curtailed.

"I would hope to see the U.S. take a stronger leadership position on climate change and to sign on to an agreement to reduce greenhouse gas emissions," Amparan said.

She encouraged area residents who cannot attend the march in New York to participate in one of the activities offered in Columbia or Jefferson City that day.

"I think people will be very happy and enthusiastic to be able to be with people with similar views and to express concerns about climate change and a lack of government action," Amparan said.

The CoMo People's Climate March is sponsored by several local organizations and will include a rally at 1:30 p.m. on Sept. 21 at Courthouse Plaza in downtown Columbia. A march through downtown will include visits to the offices of Sen. Claire McCaskill, D-Mo., and Sen. Roy Blunt, R-Mo. The agenda also includes several speakers and musical entertainment.

A program titled "Some Like It Hot: Religions Respond to Environmental Issues" is co-sponsored by the Capital Area Interfaith Alliance and Lincoln University.

Cliff Cain, who teaches religious and environmental studies at Westminster College in Fulton, will discuss environmental challenges and how the various religions of the world are responding to them. The event is set for 3-5 p.m. on Sept. 21 in the Scruggs University Ballroom at Lincoln University.

Meanwhile, Jackson and others will be wearing their climate ribbons as they march the streets of New York. At the end of their route, they will affix their ribbons to a giant art installation in the shape of a tree. Participants will find strangers' ribbons, read the messages aloud, and tie them to their wrists to keep as a reminder of their common goal.

(Photo: A caravan leaves Columbia Sept. 19 with Missouri and Kansas residents on their way to the People's Climate March in New York City. The event is expected to draw a crowd of 100,000.)