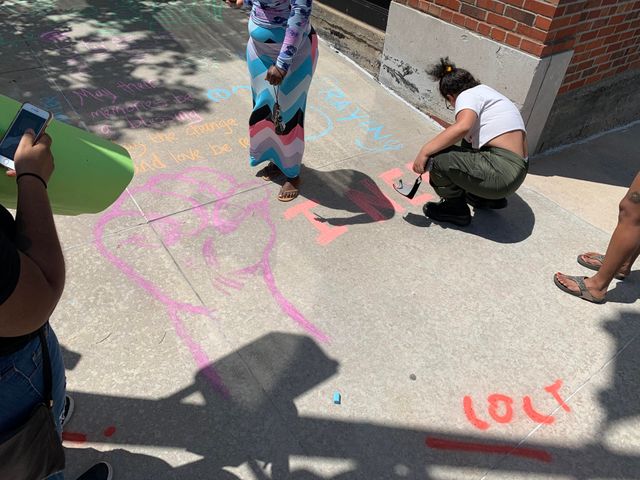 COLUMBIA - Mid-Missourians marched and held signs in Columbia on Friday morning to bring awareness to police brutality against African Americans and the need for accountability and justice.

The march comes on the heels of days of nationwide protests after video emerged of a Minneapolis officer kneeling on the neck of George Floyd, a handcuffed black man who died in custody after pleading that he could not breathe.

Minnesota authorities said the officer in the video, Derek Chauvin, was arrested and charged with third-degree murder Friday afternoon.

Protesters held two marches in downtown Columbia Friday, one at 11 a.m. and another at 4 p.m. They began at the courthouse and marched to the Columbia Police Department.

Marcus Ferguson Jr. said although he came to the protest because of what happened to Floyd, it was about much more than that.

"Today is about moving forward on the promises that we were given a long time ago, which is equality and liberation," he said. "We came out here for the many others that have lost their lives before him, the names that we can't forget, the list so long that it will take forever to go through."

Around 50 people showed up to the 11 a.m. protest. Event organizer Ellie, who declined to share her last name, says even if the crowd was small, they'd still be here.

"A lot of people cared, I didn't really do much," she said. "I just told people 'show up' and people showed up. When I first started this I thought it was going to be me and my boyfriend with one sign, and I was ready to do that."

Ferguson said he is so passionate because of his two sons. He said he wants to see structural change for them.

"I'm hoping for us to actually actively work together to fix these issues so that when my two sons get older, they don't have to see the things that I've seen," he said.

After marching to the police station, protesters wrote messages in chalk about the importance of justice and peace.

Ferguson said these are not issues that can be solved overnight, but having honest conversations about them is a good start.

"There's so many things that overlap here, and it's taking it piece by piece by piece and never feeling like the work is done," he said. "The next step is to not only start having these conversations by identifying these actions and getting rid of some of these oppressive structures that we have in place."

While the death of George Floyd did not happen in Columbia, Ferguson said there are other, more systemic issues that have fueled the protests. He said those issues are here locally and it is important to acknowledge and address them sooner rather than later.

"What happens a lot of time is we're too reactive, but we need to get proactive," he said. "We need to start identifying these things beforehand, looking at these issues now because there's no precise answer. There's enough data on here to support the changes that we need to implement."

Ellie says even if you can't make it out to the protest, there's still plenty you can do.

"Write to the Minneapolis Governor, putting it into action," Ellie said. "You don't even have to leave your home to be able to call the police department in Minneapolis, or the Governor, or people who are in charge."

Because of COVID-19, there was a virtual option as well. Protestors were able to join a zoom call at 11 a.m. to attend. Another Zoom is scheduled for 4 p.m.

"I think that's the best thing to do, to show outrage, even virtually," she said.