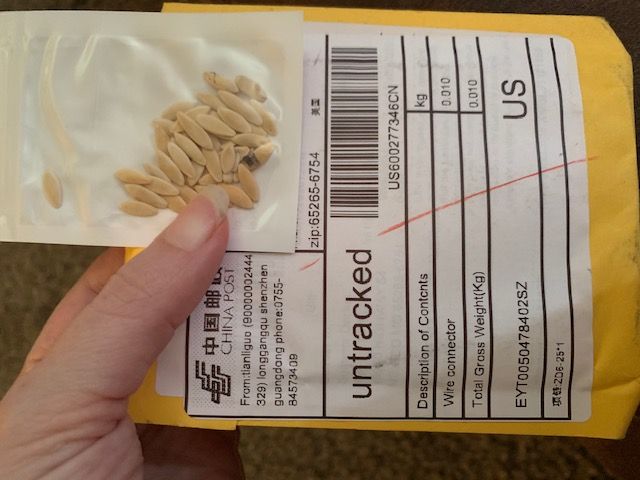 COLUMBIA — Missouri residents have been receiving mysterious seeds in the mail addressed from China and surrounding areas.

The USDA put out a simple warning: Do not plant the seeds.

If someone receives one of these packages, the USDA also urges them to call and report the package to their State Plant Regulatory Official.

Several mid-Missouri residents have reported receiving the seeds and other unsolicited packages in their mail, usually addressed from China.

Emily Connon said the accounting firm she works for received three to four packages of the seeds as early as February, possibly before then.

Sami Jo Freeman, communications director at the Missouri Department of Agriculture, said that this falls under USDA jurisdiction.

“Technically this is illegal importation of seeds,” Freeman said.

The USDA and Missouri Department of Agriculture have not been able to identify the seeds, but they have noticed that they are not all the same.

Freeman said in this case, the identification of the seeds is not the top priority. The USDA and Agriculture Department’s main priority is to find out if there is any risk associated with the seeds.

“Agriculture is the number one economic driver for the state of Missouri,” Freeman said. “An $88.4 billion evaluation is what we place on it. So whenever you have unidentified seeds, they can be one of two things: invasive or noxious weeds.”

“Anytime you have a seed that is not native, you want to be very careful about that, whether it’s coming through a package or it arrives elsewhere,” Freeman said.

Residents should refrain from opening the inside packaging, planting the seeds, report the package to the USDA, and hang on to the package. Freeman said residents should not throw away these seeds, because they want to get them to the right place to be analyzed.