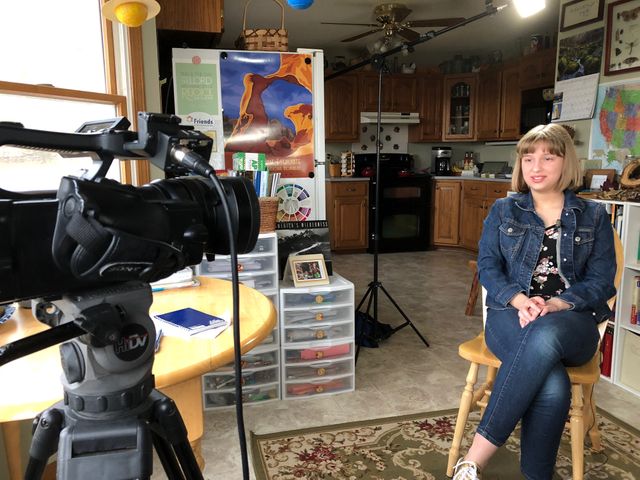 WARDSVILLE - Lauren Holsapple competed in a local spelling for the first time three years ago, back in fifth grade.

"I got second in that bee and I was like, 'wow, I really enjoyed that, I want to do better'," she said.

Since then, she has competed every year, and for the last two Lauren made it to the regional bee.

Last year, in the final round she had to spell a word she knew, but Lauren said being overconfident cost her the chance to win the competition.

"I just mixed up two of the letters, and even though it was really disappointing to not advance further that year, I learned a lot from it because now I am a lot more careful when I'm saying my words, and very slow," she said.

Being more careful helped her win this year's competition. Lauren will be one of 500 competitors at the Scripps National Spelling Bee in Washington, D.C.

"I was like kind of glad it was over, cause I really, really enjoyed spelling bees but also it's nerve-racking," she said. "So, I was kind of good, now I get to go to Washington, D.C."

Lynne Holsapple, Lauren's mom, said all the family celebrated when her daughter won the regional bee.

"We all cried, my husband, my daughter and I. It was very moving, she's wanted this for a long time," Lynne Holsapple said.

Lauren's parents and her sister Rachel all help her prepare for her spelling competitions.

"For words from Latin and Greek I learn the stems, so I learn little pieces of words," Lauren said. "Words from other languages, I like to read books in those languages, and just have mom and dad quiz me on them."

Without the support of her family, Lauren said it would be hard to get ready to compete.

"I wouldn't have anyone to quiz me, and then it's hard because you don't get any practice that's like at the real thing," Lauren said.

She added her passion for spelling bees comes from her interest in languages and the history of words.

Her mom says she taught Lauren that passion for languages through homeschooling.

"Ever since she was about six year old, we've introduced Spanish, and Latin and Greek just in different programs that we've found," Lynne Holsapple said. "There are language programs, for little kids even, that are fun. You know, they teach them songs to learn the vocabulary and things like that."

Lauren is now preparing for the national competition. Her goal is to make it to the semifinals.

"It's a lot more learning root words that I don't know, cause there are so many Latin and Greek words," she said. "So, I am learning a ton of those, and then also memorizing lots of spelling patterns from different languages."

As her daughter prepares for the nationals, Lynne Holsapple encourages her to work hard and do her best, keeping in mind that in spelling bees the hard work of competitors is not the only thing that determines the winner.

"There's always an element of luck in this spelling bees, and she knows that," she said. "I think all of the competitors know that, you just never know what word you are gonna get."

Lauren is 14 years old. Because of her age, the Scripps National Spelling Bee will be Lauren's last chance to participate as a speller. She wished she had started competing earlier.

"I started in fifth grade, just because, I don't know, I never really thought much about it before. I mean, I think I had watched a few minutes of spelling bee before fifth grade," she said. "If I had started in first or second grade, I would have all those more years of experience."

Lauren encouraged other competitors who participated in this year's regional competition to not give up on their passion for spelling bees.

"Just keep studying because like you can only improve. Just as long as you focus and keep studying, then you'll just get better," she said.

After competing in Washington, D.C. at the end of May, Lauren said she will start working on speaking German and Spanish, and focus on improving her skills playing piano, guitar and ukulele.