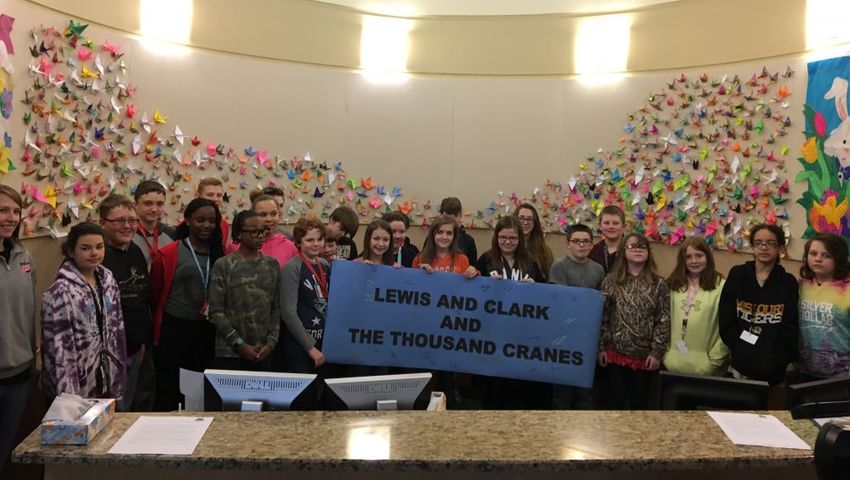 Lewis and Clark Middle Schoolers' pose for a picture after signing the banner. JEFFERSON CITY - A short story inspired two Lewis and Clark Middle School classes to give back to the community in Jefferson City Friday.

Mercy Karanja one of the 6th grader that participated in the project said that little things like these make a huge difference.

"I really think it means something to people, cause a lot of people don't actually care that who ever is sick - fine lets just go meet them at the hospital and say 'Hi' and 'Bye.' This is actually very special to us and to the people with cancer," Karanja said.

The paper cranes were donated to the Goldschmidt Cancer Center (GCC).

"I think it make the kids here and everybody feel happy that people care about them," Carter Rackers a 7th grader said.

In previous years, the paper cranes were given to people within the school's community like the students' relatives and friends with cancer, but the students felt a need had to be made.

"This year, my students were saying 'Well, why can't we give them to more than one person?', so we thought of a way it could impact more people, and I said 'We could take them here, to the Goldschmidt Cancel Center, where there is going to be countless numbers of people that get to see them and be inspired by that," Pund said.

The inspiration for the project came from the short story Sadako and the Thousand Paper Cranes by Eleanor Coerr. The story is about a Japanese girl named Sadako who is diagnosed with leukemia after the bombing of Japan at the end of WWII. The protagonist decides to fold 1,000 paper cranes because of Japanese legend that says folding 1,000 paper cranes grants you a wish. Sadako wish was to become healthy again.

"It's going to make them feel very happy, cause they will actually know that people do care about them," Karanja said.

Pund has been coordinating this project for the past six years. Pund's experience with folding paper cranes started long before she became a teacher.

"In high school, two of my teachers had cancer and we ended up folding cranes for them. So, we kinda did this project when I was in high school, and I just remember how cool it was to be able to help someone who is really sick feel a little bit better," Pund said.

She also said that she wanted to replicate the experience when she became a teacher, and teach them that service work is rewarding.

"Teach them how nice it is to do nice things for other people, and how good that can feel, even though it's kinda hard, it ends up being very powerful," Pund said.

Rackers left a message for students who wish to do a project like this in the future.

"I tell them it's a cool experience to do if that they get a chance, to do it," he said.

The students' cranes and the banner are displayed at GCC.

Staff at the GCC said they will start giving the cranes out to patients immediately.