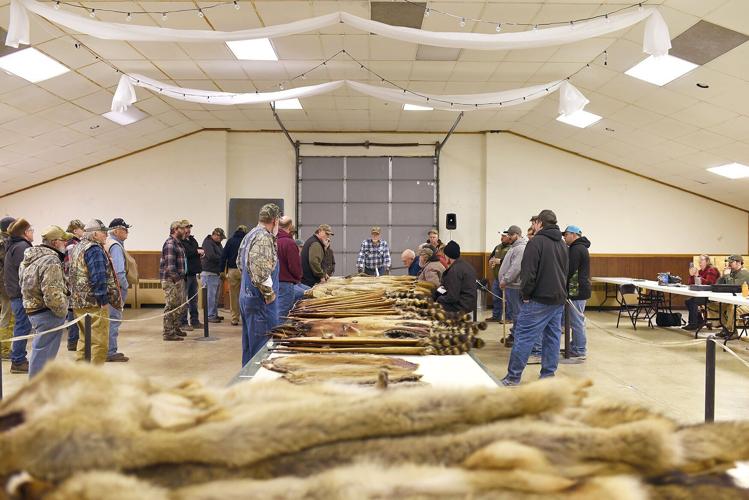 Buyers, trappers and spectators gather around a conveyor belt stacked with raccoon, coyote, beaver and other furs at the Missouri Trappers 2022 Fur Auctions on Saturday at the Montgomery County Fairgrounds. There were 40 fur trappers selling furs, which was far fewer than the 90 lot numbers available. Some sellers chose to wait this auction out in hopes that the fur market would be better in the near future. “It’s a gamble I’m taking, but I’m gonna do it,” fur trapper Jim Love said. 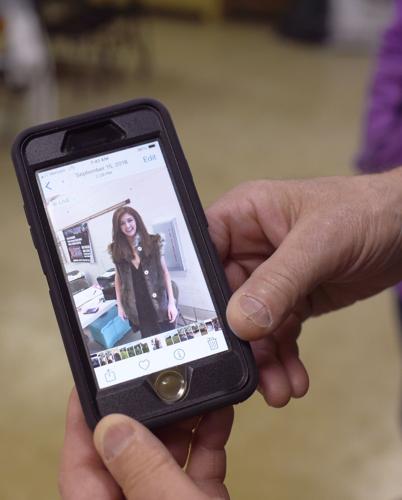 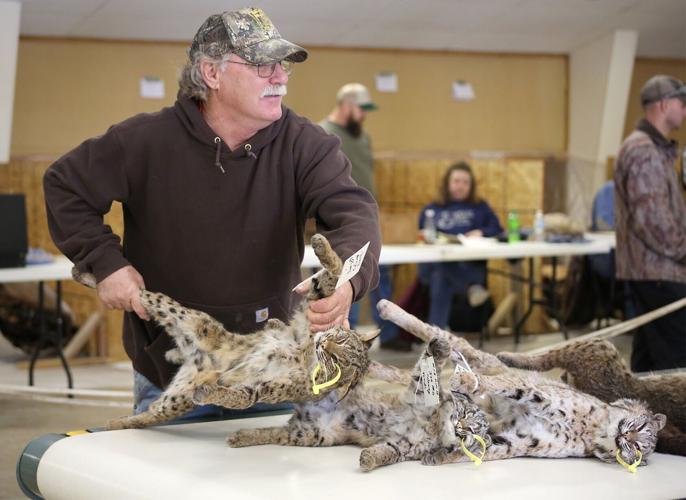 Seller Scott Beshears of Wellsville places bobcats onto a conveyor belt to be auctioned off. Beshears said he has been coming to the fur auction every year for the past 20 years. He said the bobcats and muskrats probably had some of the best sales of the furs he auctioned off Saturday. 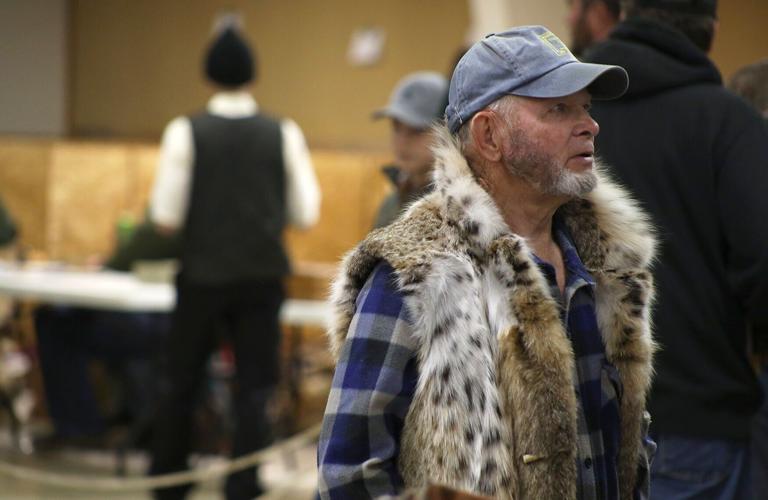 Tom Alexander, a Missouri Trappers Hall of Fame inductee from Cainsville, wears a vest made from bobcat fur at the Missouri Trappers 2022 Fur Auctions on Saturday at the Montgomery County Fairgrounds in Montgomery City. Alexander said the vest was made by someone in Kansas City and that it took five bobcats to make it, the first of which he caught himself. Alexander has been trapping for 63 years. 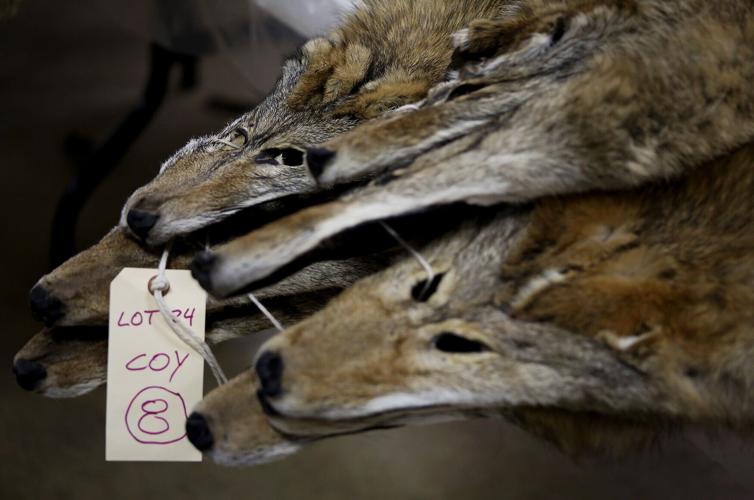 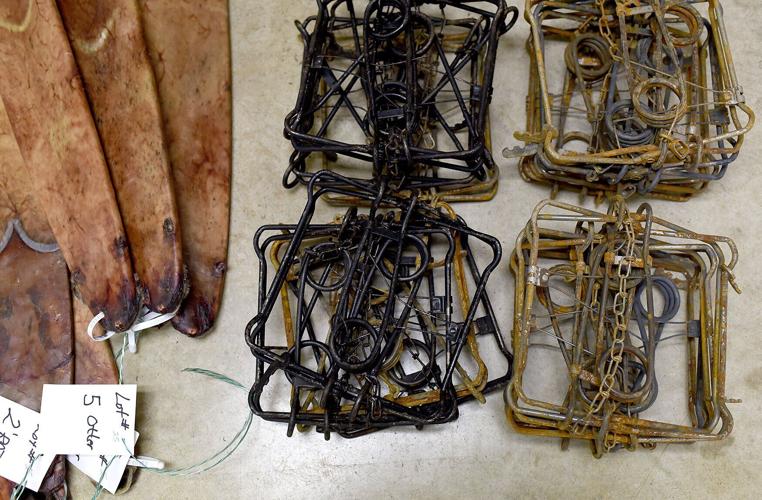 Water traps and otter furs lie on the ground Saturday at Montgomery County Fairgrounds in Montgomery City. Water traps typically kill animals as they are trapped, while land traps keep the animal alive until they are found. 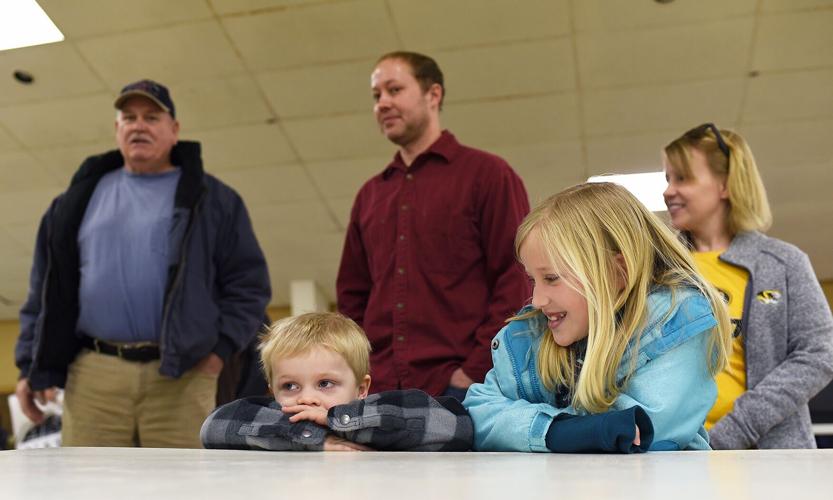 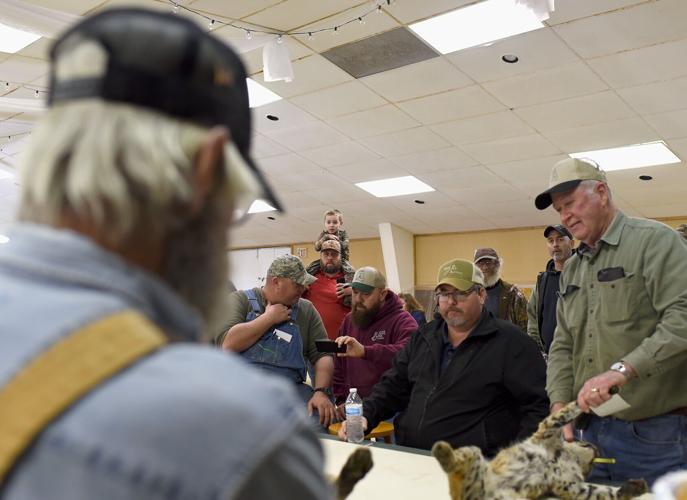 Buyers, sellers and spectators watch furs and carcasses move across the conveyor belt Saturday at the Montgomery County Fairgrounds in Montgomery City. Fur trappers primarily sold skinned furs, stretched and dried furs, carcasses and bags of castor. Generally, furs that are stretched and dried sell for more than the furs that are only skinned, fur trapper Mike Naeger said. Carcasses were sold to be potentially used for taxidermy. 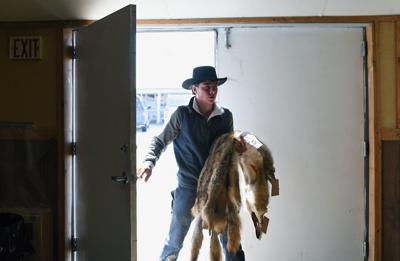 The annual Missouri Trappers 2022 Fur Auctions was held Saturday in Montgomery City, but the market has declined and the event was smaller than usual.

About 40 trapper lots and 14 buyers came to the Montgomery County Fairgrounds to auction off raccoon, bobcat, otter, muskrat, coyote, beaver, badger, skunk and other animal products.

In past years, the Missouri Trappers Association auctions were bigger and held more frequently, but the fur market has declined over time and fewer people are trapping.

“(People) are surprised that the prices are as good this year as they are,” seller Scott Beshears said. “They didn’t think they’d bring as much, but there’s not as many people trapping as there used to be. Just the die-hards still trap.”

Despite the decrease in the fur market, multi-generational families of trappers turned out for Saturday's auction.

Trapper and seller Jim Roberts, from Rocheport, brings his daughters to the auctions because he wants to pass the tradition on to them.

“They really love it,” Roberts said. “They enjoy doing it. It’s a heritage, and this needs to be carried on.”