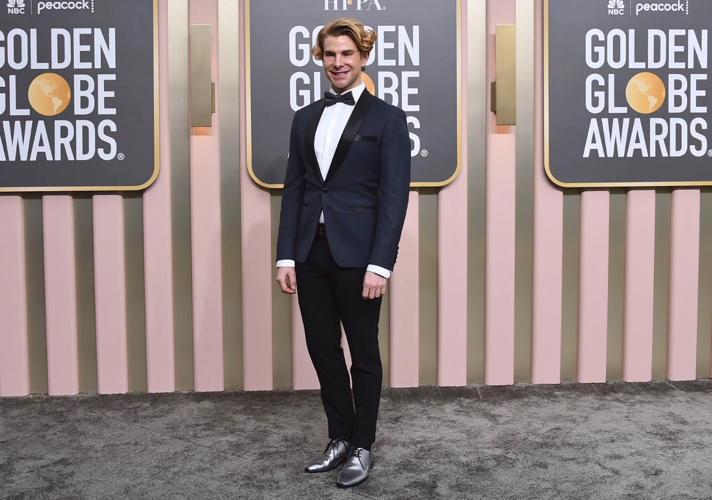 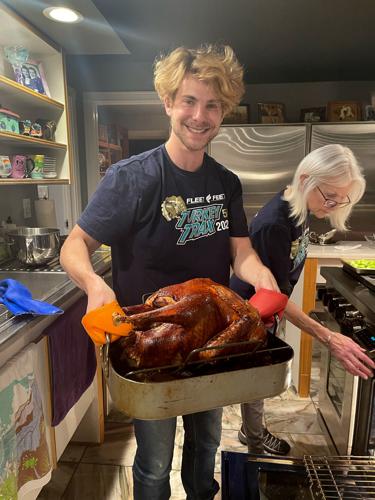 Daniel Dreifuss holds up a freshly cooked turkey that he was in charge of preparing as his mother, Sally Silvers, helps with the oven. Silvers said that Dreifuss once pronounced turkey "thurkey," which turned into a family joke when her middle daughter wouldn't "let him forget." 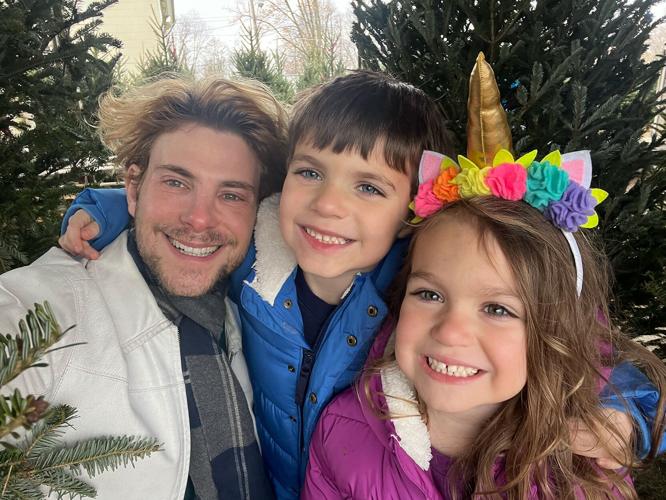 Daniel Dreifuss holds up a freshly cooked turkey that he was in charge of preparing as his mother, Sally Silvers, helps with the oven. Silvers said that Dreifuss once pronounced turkey "thurkey," which turned into a family joke when her middle daughter wouldn't "let him forget."

A film produced by a Hickman High School alumnus received nine nominations for the 95th Academy Awards on Tuesday, including best picture.

Daniel Dreifuss was part of the production team behind the German title “All Quiet on the Western Front,” which was also nominated for cinematography, international feature film, writing (adapted screenplay) and production design, among other categories.

Dreifuss said he was inspired by the story of his grandfather who enlisted in World War I in 1917. Dreifuss was raised in Brazil, where he grew up hearing the tales of his grandfather fighting in the war with his first cousin. His inspiration eventually led him to produce the film.

“When I got the script, the story really resonated because I had that story in my own family in my household, and I wanted to honor those people,” Dreifuss said.

Dreifuss describes the film as an antiwar film that follows a group of young Germans and their experience in World War I and the brutality of the war.

Dreifuss said he was pleased to see how a period film in German resonated with people all around the world.

“To have nine nominations, especially for what is an international film, not an English language, it’s truly remarkable,” Dreifuss said. “It’s beyond.”

This is not the first film Dreifuss produced that earned an Oscar nomination, as “No” (2012) was nominated in 2013 for foreign language film and was presented at the True/False Film Fest in Columbia. As a Hickman graduate, Dreifuss said Columbia as a city as well as his family here, who refer to him as “Danny,” hold a special place in his heart.

“Being in Columbia gave me a little bit of an idea that maybe I can come back (to the U.S.), and I did,” Dreifuss said. “I landed in Los Angeles with two bags and went about foraging my path on my own.”

Sally Silvers, a Columbia resident whom Dreifuss said he considers to be his mom, said he came to live with them at 16 to attend high school.

Sally Silvers said when she was in eighth grade, Dreifuss’ father stayed with her family in St. Louis as a foreign exchange student from Uruguay.

“He lived with us for a year, and it was a situation where he really became a part of our family. He became our brother,” Silvers said.

His father eventually moved to Brazil, where Dreifuss grew up, and Dreifuss chose to follow in his dad's footsteps and stay with the Silvers family in Columbia when he was in high school. He described his year there as a year “out of a Hollywood picture.”

“Ever since then, I consider him a son and he considers me mom,” Sally Silvers said. “He has no other siblings other than his Columbia siblings, so we are family, and that is that.”

Dreifuss said that living in Columbia and having supportive family in the States helped him believe his dreams were truly attainable.

“Without this family ... , I wouldn’t be here,” Dreifuss said. “They really helped me. They helped me get through grad school, supported me along the way and believed in me when I didn’t believe in myself.”

Zach Silvers, whom Dreifuss considers a brother, said despite all of his accomplishments, Dreifuss remains humble and is extremely passionate about his craft.

“I have great fondness for Columbia, Missouri. It’s a city I love to escape to,” Dreifuss said. “When I’m there, I go back to being Danny, who went to school there and walked the halls of Hickman trying to find my way.”

The film was the only streaming title to receive a best picture nod.

Daniel Scheinert and Daniel Kwan’s “Everything Everywhere All at Once” landed a leading 11 nominations on Tuesday, including nods for Michelle Yeoh and comeback kid Ke Huy Quan, the former child star of “Indiana Jones and the Temple of Doom.” Released back in March, the A24 film has proved an unlikely Oscar heavyweight against the expectations of even its makers. Yeoh became the first Asian actor nominated for best actress.

The 10 movies up for best picture are “Everything Everywhere All at Once,” “The Banshees of Inisherin,” “The Fabelmans,” “Tár,” “Top Gun: Maverick,” “Avatar: The Way of Water,” “Elvis,” “All Quiet on the Western Front,” “Women Talking” and “Triangle of Sadness.”

Nominations were announced Tuesday from the academy’s Samuel Goldwyn Theater in Beverly Hills, California, by Riz Ahmed and Allison Williams. If last year’s Oscars were dominated by streaming — Apple TV+’s “CODA” won best picture and Netflix landed a leading 27 nominations — movies that drew moviegoers to multiplexes after two years of pandemic make up many of this year’s top contenders.

For the first time, two sequels — “Top Gun: Maverick” and “Avatar: The Way of Water” — were nominated for best picture. The two films together account for some $3.5 billion in box office. Tom Cruise missed out on an acting nomination, but the film credited with bringing many moviegoers back to theaters walked away with seven nominations. Ryan Coogler’s “Black Panther: Wakanda Forever,” made in the wake of Chadwick Boseman’s death, scored five nominations, including the first acting nod for a performance in a Marvel movie: Angela Bassett, the likely favorite to win best supporting actress.

Baz Luhrmann's bedazzled biopic “Elvis” came away with eight nominations, including a best actor nod for star Austin Butler and nominations for its costumes, sound and production design.

Though Steven Spielberg’s “The Fabelmans” struggled to catch on with audiences, the director’s autobiographical coming-of-age tale landed Spielberg his 20th Oscar nomination and eighth nod for best-director. John Williams, his longtime composer, extended his record for the most Oscar nominations for a living person. Williams’ 53rd nominations trails only Walt Disney’s 59.

The Associated Press contributed to this report.

Best picture: “All Quiet on the Western Front”; “Avatar: The Way of Water”; “The Banshees of Inisherin”; “Elvis”; “Everything Everywhere All at Once”; “The Fabelmans”; “Tár”; “Top Gun: Maverick”; “Triangle of Sadness”; “Women Talking.”

Best director: “Martin McDonagh, “The Banshees of Inisherin”; Daniel Kwan and Daniel Scheinert, “Everything Everywhere All at Once”; Steven Spielberg, “The Fabelmans”; Todd Field, “Tár”; Ruben Ostlund, “Triangle of Sadness.”

Original screenplay: “Everything Everywhere All at Once”; “The Banshees of Inisherin”; “The Fabelmans”; “Tár”; “Triangle of Sadness.”

Music (original score): Volker Bertelmann, “All Quiet on the Western Front”; Justin Hurwitz, “Babylon”; Carter Burwell, “The Banshees of Inisherin”; Son Lux, “Everything Everywhere All at Once”; John Williams, “The Fabelmans.”

Original song: “Applause,” from “Tell It Like a Woman”; “Hold My Hand,” from “Top Gun: Maverick”; “Lift Me Up” from “Black Panther: Wakanda Forever”; “Naatu Naatu” from “RRR”; “This Is a Life” from “Everything Everywhere All at Once.”

Documentary feature: “All That Breathes'; “All the Beauty and the Bloodshed"; “Fire of Love"; “A House Made of Splinters"; “Navalny.”

Animated short: “The Boy, the Mole, the Fox and the Horse”; “The Flying Sailor”; “Ice Merchants”; "My Year of Dicks”; “An Ostrich Told Me the World is Fake and I Think I Believe it.”

Documentary short: “The Elephant Whisperers”; “Haulout”; “How Do You Measure a Year?”; “The Martha Mitchell Effect”; “Stranger at the Gate."

Film editing: “The Banshees of Inisherin”; “Elvis”; “Everything Everywhere All at Once”; “Tár”; “Top Gun: Maverick.”

Production design: “All Quiet on the Western Front”; “Avatar: The Way of Water”; “Babylon”; “Elvis,” “The Fabelmans.”

Makeup and hairstyling: “All Quiet on the Western Front”; “The Batman”; “Black Panther: Wakanda Forever”; “Elvis”; “The Whale.”