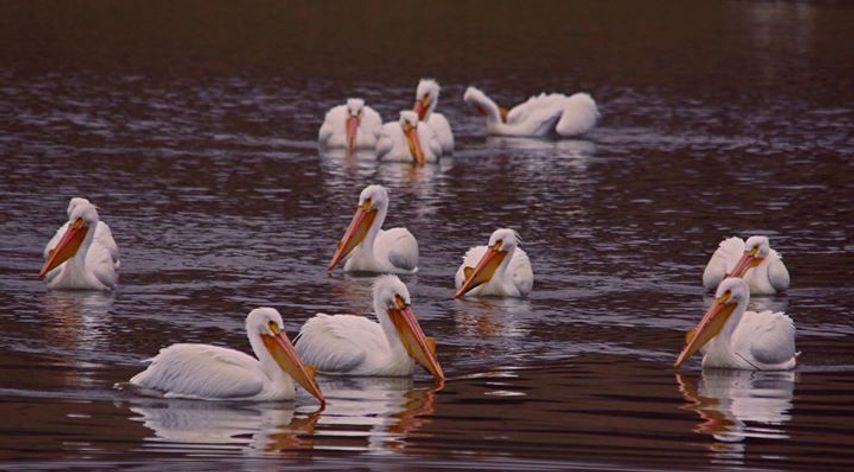 MEXICO - It might seem strange to sight an ocean bird in Missouri, but seeing the American White Pelican isn't uncommon in our area.

Sarah Kendrick, Missouri Department of Conservation ornithologist, said the pelicans come through Missouri twice a year during the spring and the fall.

But this time the pelicans decided to pause their regularly scheduled migration course due to weather, spending extra time around mid-Missouri.

"They are likely staying in Mexico, Missouri because the weather is very strange this year, we are about two to three weeks later than normal for vegetation coming out and weather patterns," Kendrick said.

She said the freezing cold can make some of their nesting lakes frozen solid.

"So it's very cold where these birds breed, which is across Canada and in parts of western U.S. It's still very cold and they nest on isolated islands along big lakes and so a lot of those lakes are probably still frozen solid, so they're waiting for those nesting areas to open up," Kendrick said.

Kendrick said if it were warmer, the birds would probably be further north right now.

The birds have landed in a lake behind the KXEO Radio Station in Mexico.

One visitor, Jacob Nelson, who was in Mexico this week, saw a Facebook post about the birds.

"I think it's pretty neat that they are here. Unfortunately, a lot of people in this area don't know that they are actually uncommon to be in Missouri let alone central Missouri," he said.

He said for residents, this could be a big deal.

"I've talked to a couple of relatives who have lived in the city of Mexico their entire lives and this is the first time they've seen them, so this is kind of a big deal," Nelson said."It's something neat just to be able to get a glimpse of an animal you don't get to see unless you go to a zoo."

Nelson asked for permission and took a picture on someone's private property to get a closer look.

"The secret of it being a private lake because you'll get people that share Facebook post, post things on there and you don't want the public going out to some private property to start taking pictures of an animal," said Nelson.

Kendrick said the pelicans are some of the largest North American birds and encourages people in that area to go out and see them.