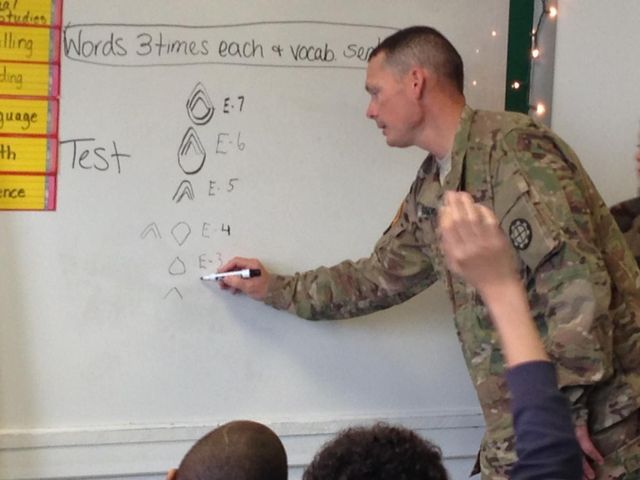 JEFFERSON CITY - A class at East Elementary School got surprised Monday by a soldier who they have been writing to since the beginning of the school year.

1st Lt. Jeff Hollis said, "The kids initiated the letters with me and I wrote them back and then they wrote another batch of letters. I received a lot of letters."

Tina Harrison teaches 5th grade and knows Hollis from school and has been friends with his wife for years.

It was a surprise to the kids of the class, who did not know he had returned to the states.

A fifth grade class got a surprise today. Ms. Harrison's class at East Elementary School has been writing l... https://t.co/BNHXcFq4FH

Hollis, who was deployed in June of this year with an engineering company, received letters right away. He said he enjoyed putting names to faces during the meeting.

"It was pretty neat because some of them put personal information in their letters and I could kind of see their character and stuff," Hollis said. "It was cool seeing them first person."

Harrison said she got the idea to have a pen pal for her class when another one of her friends got back and she realized she missed her chance to write to him. Harrison said the students loved it.

"They wrote on Veterans Day and they were having an assembly about the history of Veterans day," Hollis said. "It was kind of neat for them, you know, to see the history and how it is going right now."

Hollis grew up in mid-Missouri. His company was based in Festus, but he and his family moved to Indiana a few years ago.

His company returned Saturday and he said he and his family had to make a stop in Jefferson City before finally heading home to Indiana.