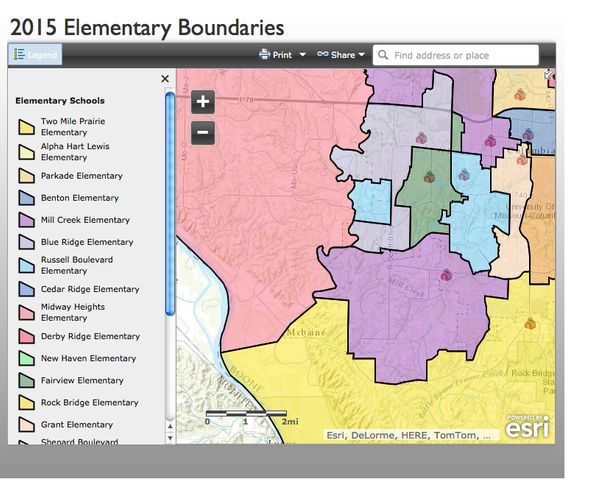 COLUMBIA- Boundaries approved in January will move some Columbia Public Schools students to new schools again. Two months ago the Columbia Board of Education approved a new boundary that would shift more than 100 students from Mill Creek Elementary to Paxton Keeley, Russell Boulevard and Grant. However, early last month the board made changes again that would put more than 40 students back into Mill Creek Elementary.

Asst. Superintendent for Elementary Education Peter Stiepleman proposed the new boundary changes due to the overcrowding the initial plan caused in the other schools.

James Whitt, the Vice President of the Columbia Board of Education, said the administration caught the blip and came back and presented to the board quickly. "There was a mistake made and a segment of students, if we had moved those students over to one of our schools it would have overcrowded that school," Whitt said. "So we decided to take that segment and moved them back to Mill Creek."

Whitt said the administration and the school board has been working with parents for a while. "We worked with them for well over a year and parents did make proposals," Whitt said.

Some families told KOMU 8 News after the initial boundary change they had hired an attorney and even put their house on the market.

"I know personally of a few families that will be moving," one parent said in December.

Parents strategically picking elementary schools comes as no surprise to the school board. Neither is the disparity in diversity. "In the northeast there are a lot more free and reduced lunch children out there for those schools and a lot less in the Mill Creek area, and a lot of parents make decisions in regards to educating their kids because of that," Whitt said.

According to Whitt, the newly accepted boundary plan will help better diversify Mill Creek. The school board hopes to work more closely with local realtors and the city council to better prepare for the influx of new residents in Columbia.

The Mill Creek PTA will hold a meeting on February 11 at 6:30 pm where parents can go to voice their opinions.