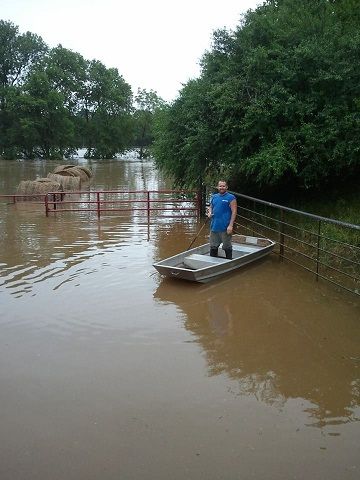 Louise Shriner lives on the Osage River and said water was up to the windows of her new pickup truck. Water also completely flooded her backyard. She said if not for her neighbor picking her up in a boat, she would not have been able to leave her house.

Other Tuscumbia residents said similar things. Many could not get back to their homes because water covered the roads. They said they saw hay bales, a camper and even a mobile home float down the river Wednesday morning.

As of Wednesday afternoon, the river was beginning to lower in the Tuscumbia area, but there is more water on the way.

Ameren Missouri's Osage Plant Superintendent said that typically the river rises about three feet as a result of opening spillways, but in this rainfall event, opening the spill gates was delayed about four hours which allowed the river to fall downstream of the dam as local runoff to the river slowed. In fact, the river level measured at Bagnell Dam has continued to fall even after opening the spillway gates.

Thompson also said it depends almost completely on the weather as to how long the spillways and turbines will stay open. If heavy rains happen within the next few days, the dam will likely stay open for several days.

According to several Tuscumbia residents, it usually takes the water 7-8 hours to get from the dam to where they live. They say they will probably see a bit of a rise in water, but Ameren believes they likely will not.