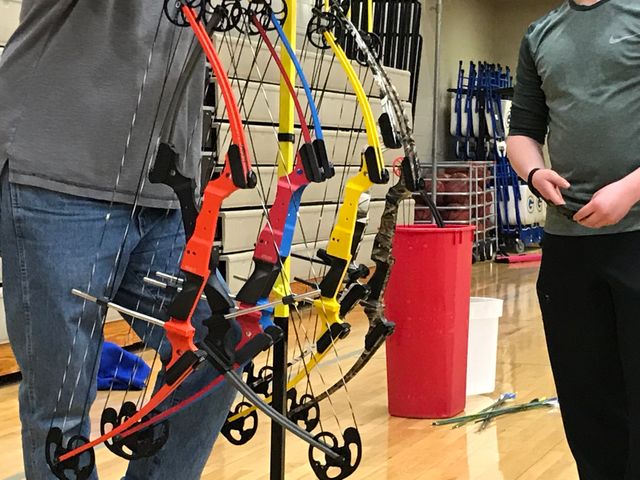 COLUMBIA - Bullseye is the name of the game for thousands of archers this weekend.

The 2018 Missouri National Archery in the Schools Program (MONASP) Tournament is in Branson this weekend, March 23rd and 24th.

The tournament features students of all ages from schools across Missouri. Gentry Middle will have six students participating; Rock Bridge will have one.

Evan Miller, a Rock Bridge 9th grader, said he tried archery when football season ended. He went to practice, made the team, and has been enjoying the sport ever since.

"I think it's a good life lesson skill," Miller said. "It helps out with your anger. It just helps you keep calm, keep focused, and it helps you try to keep your body and yourself calm."

Evan would have not been able to discover his love for archery if it weren't for Coach Angie Roberds starting the program more than a decade ago.

"I've been a lover of sports my whole life and I've coached and been around young people for a long time," Roberds said. "So, about 11 years ago, we were shooting in P.E. class and this state tournament opened up, was available, and I asked a couple kids to go to it and I've been doing it ever since."

Roberds said she loves what archery has to offer for young kids: focus, confidence, and belief in one's self.

"It's them with a bow and arrow," Roberds said. "Everybody has the same equipment and they're up there and they shoot at 10 meters, and they shoot 15 meters. It's them believing in them, and repeating the same process every time."

120 archers will shoot at one time, every hour, for the duration of each day.

This year's event will host more than 2,400 archers, and hopefully bring in a crowd of more than 12,000 spectators.

The event has continued to grow over the years. Roberds said it was moved to a convention center in Branson because Tan-Tar-A, the resort in Lake of the Ozarks, couldn't fit them all.

While Miller likes to win, he said he also enjoys "just being out there. Being with people, seeing different things that people do, and just hanging out."