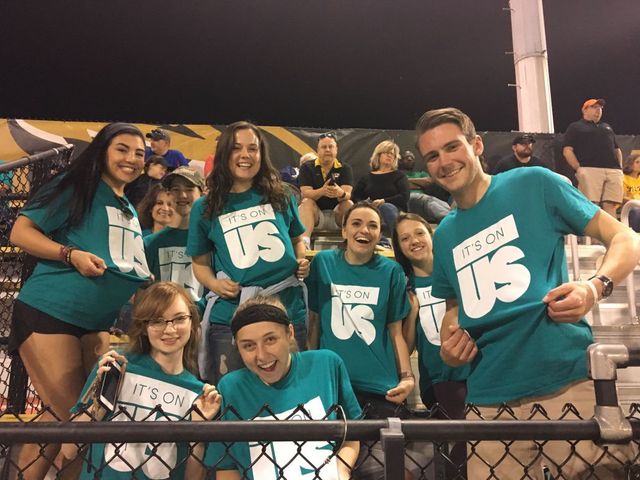 COLUMBIA - Along with the traditional black and gold, teal was the color on display at Taylor Stadium on Friday.

The color of sexual assault awareness month splattered the stands as part of a "Teal Out" for Missouri's series opener against No. 10 Kentucky. It was the first of its kind in all of Division I athletics.

The "Teal Out" was the culmination of Missouri's partnership with It's On Us, a national organization committed to helping end sexual violence on campus.

"It helps set that national standard that this is something that athletics should be taking seriously," said Tori Schafer, the director of It's On Us at MU. "This is something we should be having proactive conversations about in the future."

The baseball team is the first athletic team at Missouri to officially partner with It's On Us. Junior relief pitcher Nolan Gromacki spearheaded the team's involvement.

"The support I have from those guys in the locker room is more than I could ask for," Gromacki said. "Having their support makes it easy to do stuff like this because I know every guy in that locker room and every coach has my back."

Gromacki also serves as co-president of Missouri's Student-Athlete Advisory Committee. His goal is to change the assumptions about college athletes.

"It's absolutely shocked some people," Gromacki said. "There's a lot of groups on campus that don't think so highly of athletes a lot of the time, especially talking about stuff like It's On Us. Seeing how people have kind of flipped their predisposition about what a baseball player should look like and those assumptions that they wouldn't want to be involved with things like this was pretty special tonight."

Schafer has been involved with It's On Us for two years, but official programming at MU did not start until April 10. The "Teal Out" game was the final event of the organization's first week of action on campus.

"I feel like there's a stigma around talking about sexual assault and athletics, so we're really grateful that Coach Bieser decided to take up this initiative and promote a positive cause and change on our campus," Schafer said.

For Gromacki, his inspiration comes from his sister, who will attend MU in the fall.

"This school means so much to me and I want to be able to take the love I have for my family and try to reciprocate that to everyone on campus," Gromacki said.

While the baseball team is the first Mizzou team to get involved, Schafer said she has already been approached by the track team. She said she also plans to reach out to other teams on campus, like women's basketball, football and softball.

"I think it's going to be pretty contagious," Gromacki said. "I feel like other sports are going to want to get involved because they see the energy it can bring around the program."