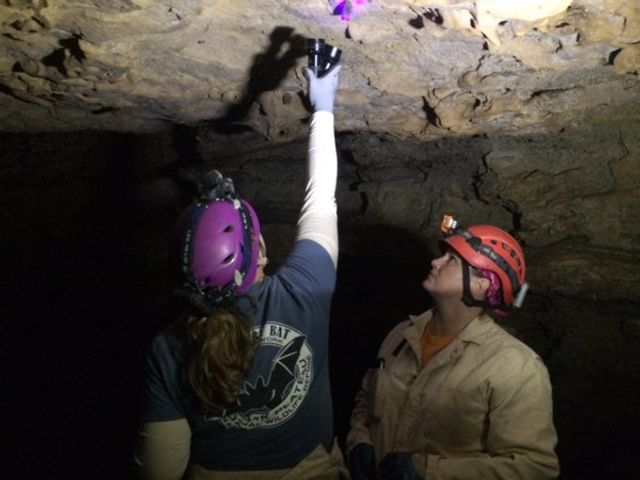 BOONE COUNTY - White-nose syndrome affects bats in Missouri and nationwide, and the Missouri Bat Census is doing its part to help prevent the spread of the deadly disease.

According to the United States Geological Survey, white-nose syndrome is named after the white fungus that infects the skin of the muzzles, wings, and ears of bats.

The disease permeates the bats causing them to awake from hibernation. The bats then burn fat quicker and are unable to go back into hibernation, often resulting in death. The USGS stated bats that are subject to WNS suffer a mortality rate as high as 100 percent in certain areas.

Since its discovery in 2007 white-nose syndrome has killed more than five million bats nationwide. WNS was first confirmed in Missouri in 2011-2012, and according to Kirsten Alvey-Mudd, a volunteer at the Missouri Bat Census, is said to have come over to the United States from Europe.

“If we come in and see a significant loss in bats, then in many cases, we’re knowing that WNS has already hit in that region,” Alvey-Mudd said.

Missouri is home to 16 different species of bats, which do their part to help the environment. Between the eight cave dwelling species and the eight outdoor species, bats prey on between 500-1,000 mosquitoes per hour. They also feast on larger insects such as beetles or crickets.

“Bats are really important to us, not only nationwide, but especially here in Missouri because they feed on insects and pests that are in our agriculture,” Alvey-Mudd said.

Alvey-Mudd said the number one thing people can do to protect bats is to stay out of the caves in the winter so they don’t disturb the bats while they are hibernating.

Missouri Bat Census intern Susan Wilkinson added that people shouldn’t be scared of the bats, as they aren’t out to attack humans.

“These guys are not vampire bats like everybody thinks of for Halloween. They’re not out to suck your blood; they’re out to eat an insect,” said Wilkinson.