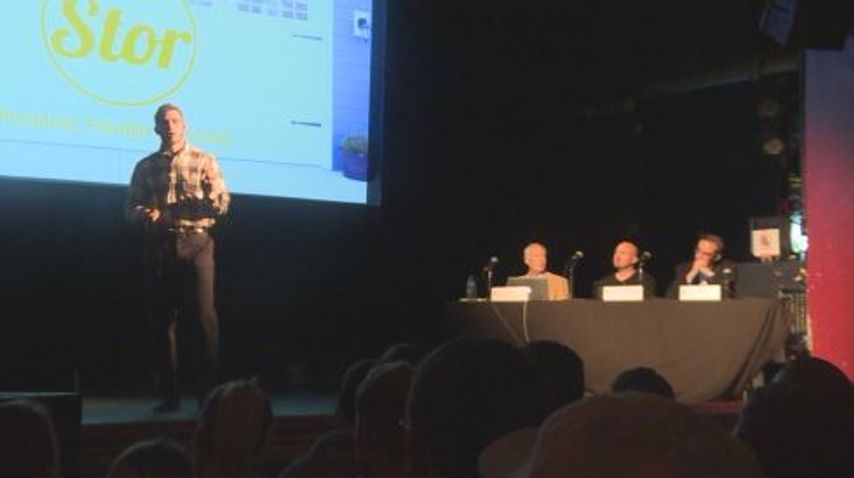 COLUMBIA - Forty-seven-year-old Amos Angelovici walked onto The Blue Note stage Wednesday night, ready to present his business idea to a 200 person audience and a panel of investors. With thousands of dollars at stake, Angelovici said he practiced his presentation at least 50 times in front of mentors, employees and family members before taking the stage.

AdSwapper, Angelovici’s app, was one of four startups to pitch its business model to investors in the hopes of raising money from the $2 million Missouri Tech Accelerator Fund. The fund invests up to $50,000 in Mid-Missouri startups to help launch their product or service. The other local startups included Testery, Ukatsu and Stor.

Even though the companies were vetted before coming onto the stage and had prior contact with the investors, the founders spent hours on perfecting their presentations.

The four startups had 15 minutes to pitch their idea and then a Q&A session with investors. After the companies finished, the panel of investors took a fifteen minute break to deliberate. Testery, a service helping companies test their websites for errors inexpensively and AdSwapper, an app filtering ads on a mobile device based on if they agree to pay the user, received $50,000 each.

Stor, an “airbnb” model for storage, received $25,000. Ukatsu, a development program for young gamers, didn’t received funding but was invited to pitch to the investors in December. The investors said they would like to see more of Ukatsu’s financials before investing.

The Missouri Tech Challenge was the first event of its kind in Columbia and Turpin said he would like to turn this into an annual event.

In other business news, Southwest passengers in St. Louis will soon have more choices for flights nationwide. Southwest is adding two daily non stop routes to San Francisco and San Jose from the St. Louis Lambert International Airport. The services will begin in April 2018 and tickets are available for purchase online now. Southwest is expanding its routes nationwide, with a recent announcement to add flights to Hawaii in 2018.

Missouri leaders are stepping up their media campaign to lure in Amazon's HQ2 to the state. In a video released Tuesday, Gov. Eric Greitens said Missouri is a national leader and home of innovation according to the St. Louis Post-Dispatch. Kansas City Mayor Sly James and sports broadcaster Joe Buck also posted videos on twitter as to why Kansas City and St. Louis, respectively, would make good locations for Amazon. The videos come just over a week before cities must submit their bids to Amazon October 19.