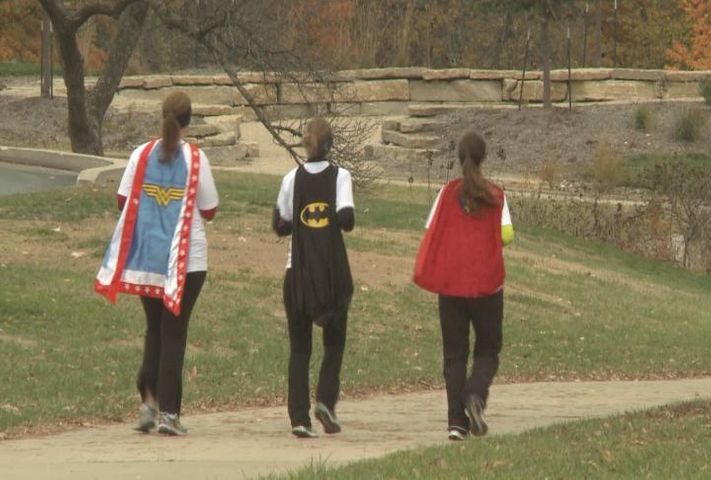 COLUMBIA - On Saturday there was a 5k run that was different than most organized runs.

Runners got together early in the morning, and talked in small groups to keep warm in the chilly morning air.

Normally before a race the runners can be seen lacing up shoes, stretching, or doing their pre-race rituals.

The Superhero 5k runners did something kids usually do hours before Halloween.

These runners were lacing up capes not shoes, and putting on their favorite superhero costume.

The Missouri Court Appointed Special Advocates (CASA) put on the Superhero 5k. The run took place shortly after Halloween so people could still get one last use of their favorite costume before packing it up again for a whole another year.

CASA Community Relations Director Kalei Holder said she picked a 5k because, "This 5k was a great way to raise awareness for CASA because it's superhero themed. Abused and neglected children need superheros. And CASA volunteers are their superheroes and their voice."

What exactly is a CASA volunteer though?

CASA Executive Director Beth Dessem said, "CASA volunteers are court appointed special advocates, and they are appointed by the court to speak up for children in court who have been removed from their homes because of abuse or neglect. We are not a part of the system so we can just speak for that child."

Besides superheroes and volunteers the Superhero 5k attracted Missouri royalty. Miss Missouri Shelby Ringdahl attended, volunteered, and soaked up the fun. Ringdahl said, "All across the state there's all sorts of fun events like this, and it's fun to keep it unique and really try to recruit a good crowd and raise some money."

Missouri CASA hopes to have another Superhero 5k next year.