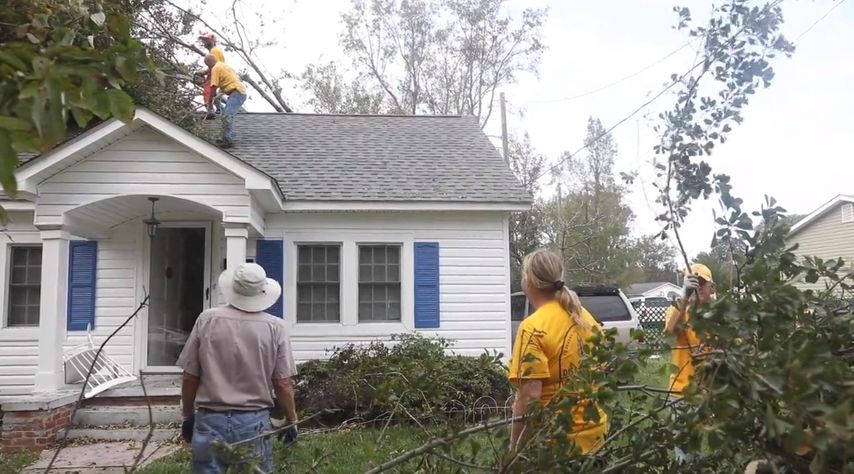 The Missouri Baptist Disaster Relief had 64 people and one therapy dog go to Wallace, North Carolina last Sunday. They now have 87 Missourians there, with 31 more going tonight.

One disaster relief volunteer said the group is helping people get through the initial impact of the storm and the devastation that was caused.

The volunteers are helping prepare hot food, install tarps on roofing systems that have been destroyed and chain saw trees that have fallen.

"One of our first priorities, of course, is speed," said one volunteer of the disaster relief, Wesley Hammond, who is in Wallace right now.

Hammond told KOMU 8 News that they have served over 33,000 meals since they arrived over a week ago.

"One of the first things that we see is relief because there is someone here to help," said Hammond. "When something like this happens, your life is turned upside down and you really don't know what to do first."

Hammond said the drive from Wallace to Wilmington, the nearest large city, is usually a 45-minute drive. It took them four hours through the damage of the hurricane.

According to the Wallace police chief, 500-600 homes are still underwater within the 16 mile long area.

"We are people of faith and we feel like this is the best way for us to express that faith and to share God's love in a tangible way," said Moss.

Moss said they plan to stay in North Carolina for at least two to three more weeks, but is still unsure when they will come home to Missouri.

Hammond said that the most rewarding thing is how gracious the people of Missouri have been, as well as how grateful the volunteers feel.

"Not only are we there to support them and encourage them, but actually to equip them to get through it and do the things that they can't do themselves," said Hammond.