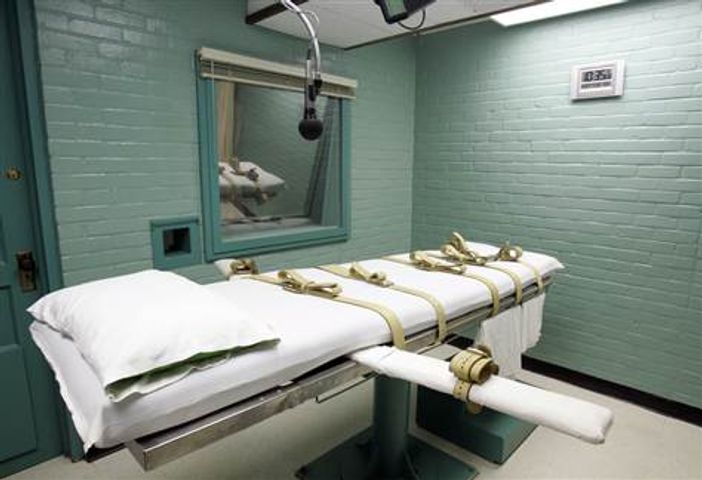 COLUMBIA - Missouri and Oklahoma are in a similar bind over decisions about the death penalty. Oklahoma's attorney general agreed to delay the next scheduled execution for six months, and a man set to be executed in Missouri later this month has also filed for a halt.

It took death row inmate Clayton Lockett 45 minutes to die on April 29 after being injected with Oklahoma's three-drug cocktail and eventually died from a massive heart attack. Lockett had spent nearly 5,000 days in prison after being convicted of shooting a woman and burying her alive.

"He had this violent reaction. Kicking and kind of rising up off of the gurney and writhing around in pain, clenching his jaw, mumbling," Branstetter said. "This was a man who had been declared unconscious. After two minutes, they closed the blinds to the witnesses, which was very concerning to all of us because we were there to witness this on behalf of the public."

With a high number of executions being carried out and a significant controversy being sparked from the public concerning botched executions such as Lockett's, new questions have arisen regarding the ethical and legal aspects of the death penalty.

So, in 2014 where are we in Missouri on the death penalty debate?

"There has been over the past few years an increasing focus on the fact that there may be innocent people under death sentences on death row," Elizabeth Carlyle said.

Law students and professors at St. Louis University are beginning a death penalty study this summer. The study will review 72 executions carried out and additional death sentences by the state since 1989. The research will focus on many factors surrounding the death penalty with the goal of coming to a conclusion about the consistency of the process.

Law student Grant Boyd is graduating in May with his Juris Doctorate from Saint Louis University School of Law with an emphasis in criminal defense law. Boyd thinks the study will be helpful in providing new information to evaluate the capital punishment system.

SLU Law School Professor Susan McGraugh said the group will be examining Missouri Supreme Court records looking at factors including race, geography, gender, the types of evidence that were in the cases and a few other elements, as well.

"When the study comes out if there's something significant, people aren't going to be able to write it off," Boyd said. "It's not like they just grabbed 10 cases out of however many Missouri has had, they're taking every single case, and it's probably going to take a while, but I think it will absolutely be ground breaking in changing the public opinion."

In 2013, public support for the death penalty as measured in the annual Gallup poll declined to 60 percent, its lowest level in 40 years.

With 39 executions across the United States in 2013, this year marks only the second time in nearly two decades the U.S. executed less than 40 people, according to a report released by the Death Penalty Information Center.

The most recent debate regarding the appropriateness of the death penalty has focused on the drugs used in lethal injections. From the source of these drugs, to their effectiveness, the points have been heatedly debated, with sharp exchanges from both sides.

"The drug that's used now is the one that's been used to euthanize animals for decades, and anyone who's ever done that knows there is no pain involved," McCulloch said. "So it's just a diversion, a distraction to get people looking away from what this guy actually did."

Carlyle said one of the reasons for fewer executions in 2013 was states' inability to obtain lethal injection drugs.

"It has turned out to be controversial because of problems with the pharmaceutical industry," Caryle said. "A lot of drugs are made in Europe, and Europe has pretty much abolished the death penalty. It gets harder and harder for states to find drugs to use."

The number of states with capital punishment laws dropped to 32 this year. Maryland became the 18th state to abolish the death penalty. Six states in the past six years have abandoned capital punishment including Maryland, Connecticut, Illinois, New York, New Jersey and New Mexico.

Missouri seems to be bucking the national trend. Since the re-instatement of the death penalty in 1976, Missouri has carried out 73 executions.

"We know for a fact that Missouri has been wrong at least three times on death penalty cases, and luckily, we caught those before they were executed," SLU law student Grant Boyd said. "We can get it wrong, and we've shown to get it wrong at least 144 times across the whole country [since 1973]."

No matter what side you take in the death penalty debate, there is no escaping the fact that these sentences are serious and have significant consequences for victims and for convicted criminals. Consider the case of Reginald Griffin.

Convicted in 1981, Griffin became the 143rd inmate in the U.S. and the fourth inmate in Missouri to be exonerated from death row since 1973, according to a report from the Death Penalty Information Center.

Griffin had been sentenced to death for the murder of a fellow inmate in 1983. The Missouri Supreme Court overturned his conviction in 2011 (Griffin v. Denney) because the state had withheld critical evidence.

Griffin's conviction relied on the testimony of two jailhouse inmates who received benefits in exchange for their testimony. Prosecutors withheld evidence that guards had confiscated a sharpened screwdriver from another inmate, Jeffrey Smith, immediately after the stabbing.

Griffin spent 26 years in prison being convicted of a murder he did not commit until the state dismissed all charges related to his death sentence on Oct. 25 of last year.

"There are a lot of innocent people in prison that need support," Griffin said. "People are turning a deaf ear on it, and that's not the answer because when they do start listening it could be too late."

What does the future hold for capital punishment in the state of Missouri?

McCulloch doesn't see any significant change in the system in the immediate future.

"When a case comes through that meets all of the requirements and is one that is deserving of a death sentence then we are going to seek death on the case," McCulloch said. "I think there will be prosecutors across the state and across the country who will do the right thing and in the appropriate situation seek the appropriate punishment."

Boyd has a different view.

"I do truly believe that in 10 years the death penalty in Missouri will be gone because we're starting to learn with the advances in science and technology that we're getting stuff wrong," Boyd said.

Nationally, the ultimate punishment remains a state-by-state issue. Unless and until the state legislature in Missouri removes this authority, the future of capital punishment in Missouri lies in the hands of the criminal justice system. How is justice served? What is cruel and unusual punishment? Does the death penalty deter crime? How do we navigate the careful line of prosecuting criminals, protecting victims and being true to our Constitutional obligations? Some states have answered these questions differently. Only time will tell where Missouri goes from here.

"If you're going to do it, make sure you do it right and make sure that everyone knows what's going on," Boyd said.