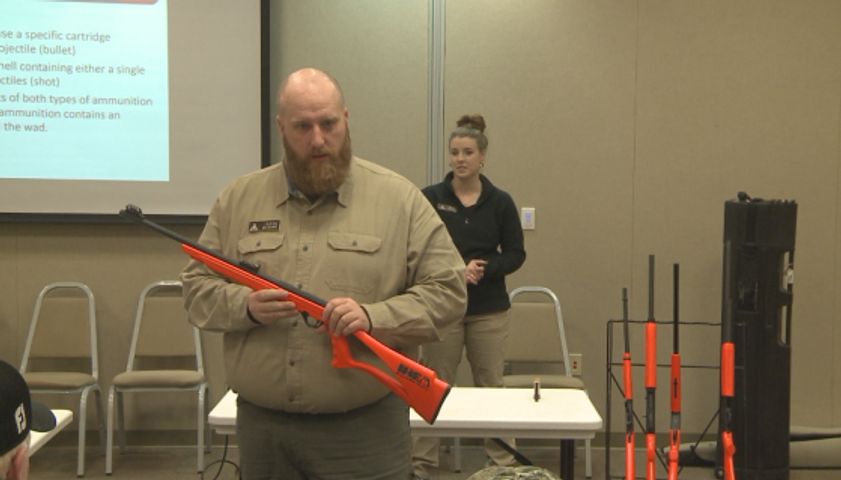 COLUMBIA - Guns are a common gifts to give during the holiday season.
That's why the Missouri Department of Conservation hosted a class Thursday to show attendees how to properly use firearms.
MDC outdoor skills specialist Justin McGuire said the class was a success last year, so the department decided to do the class again.
"This is only the second time doing this class," McGuire said. "They held it last year right after Christmas."
The main takeaway from the classroom session was safety.
"At the department of conservation we want to give people as many opportunities to get out and discover nature and enjoy the outdoors as possible and firearms are great way to do that especially right after the holiday season when people may have received a firearm as a gift. So we want to make sure that everyone has an opportunity to use that safely and use that as a way to get outside and enjoy the outdoors,” McGuire said.
MDC Media Specialist Robert Hemmelgarn said the class will give people ways to properly use guns.
“This class will really just talk about the specific safety things that people need to know in terms of how to load, unload, carry, carry these firearms in a safe manor," Hemmelgarn said.
To Hemmelgarn, now is the perfect time to advocate gun safety.
“Firearms are a popular gift during the holidays, and they’re also a popular way for people to get outside and discover nature. So we want to make sure that people that are receiving these firearms as gifts during the holidays especially have an opportunity to learn how to be safe with them and use them to get out and enjoy nature safely," Hemmelgarn said.

He said that's especially the case since holiday gun sales were successful.

Larry Wayland, Modern Arms gun shop owner, said this is the most successful time of year for his company's gun sales.
"Gun sales were good this Christmas. It was a great holiday season, increases over what we seen in years past and it’s a great gift to give, anything in the shooting sports," Wayland said.
It also is important to remind people about safety.
“Gun safety is the epitome of what we need to focus on. It's an absolute product that can cause lethal injury," Wayland said.
The class was taught by McGuire and education consultant Emily Porter.
The class taught residents:
1. Parts of firearms
2. Types of ammunition
3. How ammunition is fired
4. Range of various firearms
McGuire gave a list of hunting safety rules:
1. Always keep muzzle pointed in a safe direction
2. Be sure of the identified target and beyond it
3. Always keep safety on until ready to shoot
4. Never put finger outside the trigger guard until ready
5. Make sure the barrel and action are clear of obstructions
6. Unload firearm when not in use
7. Don't run, jump or climb with a loaded gun
8. Store firearms and ammunitions separately
9. Avoid alcohol beverages
He put an emphasis on the importance of not drinking while shooting and unloading firearms.
"Doesn't it just make your heart sink when you hear about a kid finding a loaded gun?" he said.
The course also a provided list of common causes of firearm incidents in the home:
1. Safety rule violations
2. Lack of control and practice
3. Mechanical failure
4. Shooter judgement mistake
When it comes to mechanical failure, McGuire said you must rely on safety rules.
"Never trust that safety, it is a last resort," McGuire said.
The practical session that was scheduled for Saturday is canceled due to weather. The session was supposed to held at a nearby shooting range to practice using their firearms. The future shooting portion will be determined.
MDC's Hunting safety class will be held Thursday, January 11.
If you want to attend a firearm safety event be on the lookout for future events at MDC.mo.gov or missouriconservation.org