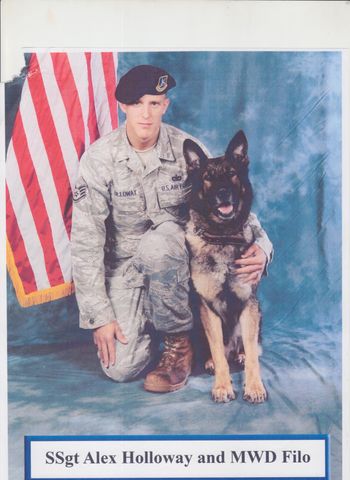 COLUMBIA - A military service dog and his handler will receive a first-of-its-kind recognition Friday night as part of the "Adopt a Serviceman" program.  The program, now in its 13th year, is adding the "Blue Tiger" award this year.

USAF Military Service Dog "Filo" of the Whiteman Airforce Base is the nation's first winner of the award.

"Filo" earned this award for his work in the line of duty in the United States Air Force.

The dog's tasks included aiding in guarding the president of the United States.

Filo also guards the B-2 bombers that do ultra long range bombing runs overseas from Missouri.

Along with an awards ceremony Friday, Filo will be honored during pre-game introductions at Faurot Field Saturday.

Sergeant Alex Holloway, the dog's handler, will be honored along with Filo.

Holloway is a Missouri native from Waynesville.

Filo will be honored Friday at the "Adopt A Servicemen" Awards Banquet at the Columbia Country Club.

One hundred fifty people are expected to attend the banquet.

Proceeds go towards support for various troop and veterans' programs.