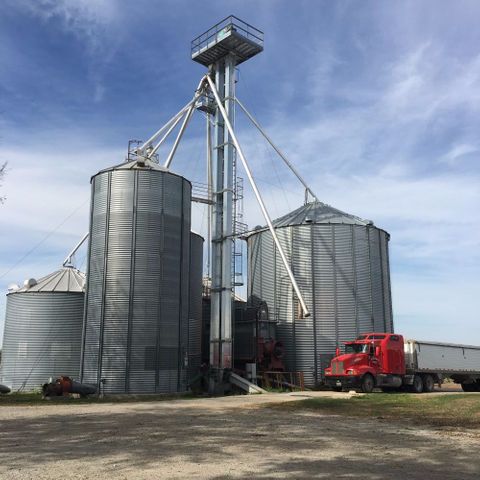 These bins on Dennis Schneider's farm near Corder, Missouri, were the scene of a grain entrapment accident and rescue in December of 2015.

CORDER - Miles from the nearest body of water, Dennis Schneider was drowning.

With every breath, he sank a little deeper, struggling to stay above the waves of grain encroaching from all sides.

“I thought to myself, ‘This is gonna be a tough way to go,’” Schneider said.

It didn’t take long before he was buried up to his neck. Immobilized by the pressure of thousands of pounds of corn, his limbs may as well have been encased in concrete.

“I thought I was just going to keep sinking away and be suffocated by the weight of the grain,” Schneider said.

Getting into a grain bin is risky. Fourteen people died in 2016 in grain entrapment accidents nationwide. For most grain bin entrapment victims, this is where their story ends.

For Schneider, it's where his story starts.

Like most Midwest grain farmers, Schneider stores his corn in on-farm bins - the rounded metal structures that dot Missouri’s rural landscape. The bins keep grain dry and marketable until a farmer chooses to sell or use it.

Sometimes, corn gets moldy or begins to sprout in the bin. In December 2015, Schneider feared corn was spoiling in one of his bins, so he did what most farmers have done at least once when they've been in a hurry: he hopped in to assess the damage.

Shortly after entering the bin, Schneider had a sinking feeling - literally. While he was inside monitoring the corn, an auger was running, removing grain from the bin at a rate of 60 pounds per second. With the corn draining from the bin, Schneider began sinking, first knee-deep, then neck-deep, into the grain.

As he sank, he made a frantic cell phone call for help. His son, standing just outside the bin, received the call. He quickly shut off the pump, stopping the flow of the grain, and called 911.

Within minutes, local fire and rescue crews arrived at Schneider’s farm. They came in a steady stream of farm trucks and emergency vehicles.

Inside the bin, Schneider focused on breathing.

They began cutting a hole in the side of the bin to drain the grain from around Schneider. But they quickly realized that was a mistake.

Cutting a hole on only one side of the bin resulted in an uneven flow of grain. As the corn pushed out of the bin, it pushed Schneider with it, burying him further.

Crews began cutting holes evenly on all sides of the bin, allowing the corn to drain uniformly from around Schneider and preventing him from becoming engulfed.

After being trapped for nearly an hour and a half, Schneider was extracted by firefighters and rescue crews.

“When I slid out of there, I realized I was surrounded by a multitude of heavenly hosts,” Schneider said. "Some of them looked like farmers or emergency people, but there was a little bit of heavenly beauty in that earthly moment."

At the time of Schneider’s accident, the local fire department was already scheduled to participate in a grain bin entrapment training later that month. The program, sponsored by MU Extension’s Fire and Rescue Training Institute, instructs Missouri fire and rescue teams on the proper procedures for saving grain entrapment victims.

A lack of training can quickly turn a rescue mission into a recovery mission. Robert Creed, an instructor for the grain entrapment course, said rescuers can cause more harm than help if they aren’t properly trained.

“Many times, about 60 percent of the time, crews can create additional hazards for that victim if they don’t understand what they’re doing,” Creed said. “We’re trying to do this training to give them the opportunity to learn the techniques they need to actually go in, safely remove grain from around a victim and extricate them.”

For the past two years, the institute's mobile grain bin entrapment simulation unit has traveled the state, providing local fire departments with the opportunity for hands-on training. The course combines classroom instruction and entrapment simulations to prepare crews for real-life rescues. Participants practice using extraction equipment and learn how to cut holes in bins to drain grain safely and prevent a structural collapse.

Schneider shares his survival story at many of these training sessions. He said he hopes to prevent future accidents by teaching the dangers of bin entrapment to rural residents and the agricultural community.

"After my accident, the county got new sets of grain bin entrapment rescue gear," Schneider said. "It is my goal for that equipment to get awfully dusty sitting in the back of the fire station."

Schneider said his experience left him with newfound wisdom.

"Every moment of our past influences our response to the present," Schneider said. "If I can use my past, my experience, to prevent somebody else from getting in a bin, it's worth it."