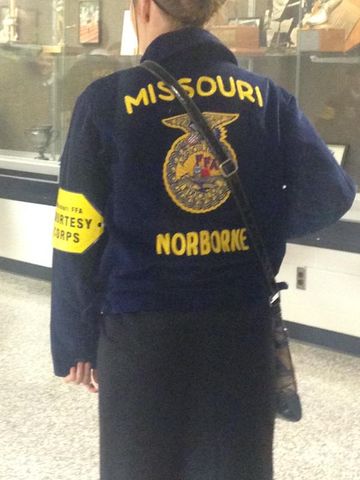 More than 8,000 people are expected to the two-day event, which is taking place at the Hearnes Center at the University of Missouri.

"Agriculture's the number one economy in Missouri, therefore all we can do is add to that and keep that agriculture number one and keep growing," Dietzschold said.

He said the people traveling for the convention benefit Columbia's economy through purchasing hotel rooms and paying to rent out venues for workshops throughout the weekend.

Dietzschold said FFA can help provide jobs for students later on in life because of the leadership styles the program teaches.

"The jobs that agriculture generates will do nothing but increase," Dietzschold said.

The convention includes two award ceremonies, one Thursday and one Friday. Students win awards based on their performance throughout the year in competitions.

Students can win certificates and plaques that will be handed out by FFA sponsors both ceremony nights.

The convention will end Friday, April 17.