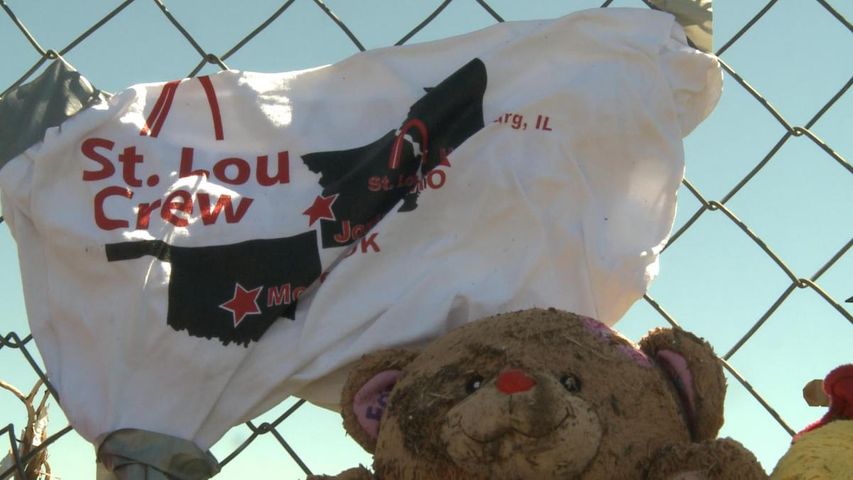 Members never saw the meticulous effort he put into his koi pond. They never met his family. They never saw his body after he tried to hide in his bathtub from a devastating tornado that hit Moore on May 27.

All they saw were his friends, devastated by their loss. And that was all that mattered.

"His sister was coming Sunday and they wanted it to be as clean as possible because he did pass away," Debbie Dillon said. "They knew it was going to be emotional for her. I guess it was one of his good friends that came and said, 'You know, there's a couple things we want to get out of the rubble.'"

The St. Lou Crew came together in 2011, when an EF-5 tornado devastated the community of Joplin.

"It wasn't a church group or anything like that," Craig Wicker, one of the leaders of the group, said. "It was just a beer-drinking group of friends who got together to help out."

Over the course of the next two years, the crew traveled to Joplin several times, and also helped with relief efforts in Harrisburg, Ill., following a deadly tornado there. When an EF-5 tornado hit Moore in late May, killing 24 people, the group packed up once again.

"It's very emotional," Dillon said. "But it's also very rewarding knowing you get to hang out with a great group of friends and do good things."

Piles of debris lined the streets of the neighborhood. Homes were ripped off of their foundations, leaving just concrete slabs on the ground. Tarps covered holes in the roofs of homes that weren't completely destroyed. The St. Lou Crew joined hundreds of other volunteers in helping to rebuild the community.

But it wasn't just about physically rebuilding Moore. It was about rebuilding hope.

A fence turned into a makeshift memorial had become home to dozens of stuffed animals, toys and messages of hope following the May tornado. But when the group returned to Moore after the second storm Friday, ready to continue its relief efforts, members found stuffed animals strewn across the ground, some face down in mud.

The group immediately began picking up the tributes to the seven children lost at Plaza Towers elementary school.

"Kids come here everyday to see their friends' memorials," Kylie Hirth, another member of the group, explained. "We didn't want them to come back and see everything lying on the ground."

"When other volunteers saw what we were doing, they all came over to help," Wicker said. "By the end of the morning, it was put back together."

By mid-afternoon Saturday, as children quietly stood in front of the memorial, one would never know that the memorial had been a pile of muddy toys merely hours earlier.

After a full weekend in Moore, the St. Lou Crew went back to the place where it all began: Joplin.

"The amazing thing is it's still not rebuilt. You drive around and there's still debris, and that's two years later," Wicker said. "So it's going to take a couple years for Moore, but if you go back even in a month, it'll start to look different."

Even after returning home from Moore, the St. Lou Crew wasn't quite done yet. The group already posted on its Facebook page asking to help yet another community: its very own hometown of St. Louis.