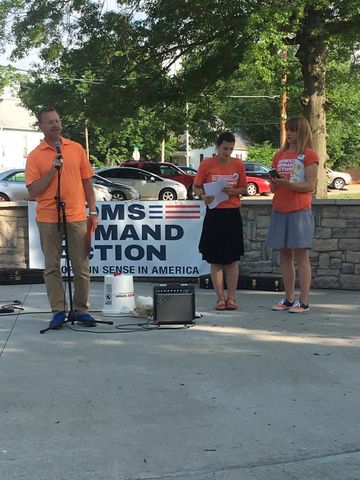 Columbia- June 2 marked National Gun Violence Awareness Day. It was commemorated with a picnic in Douglass Park hosted by the Moms Demand Action for Gun Sense in America organization in Columbia.

The group works on legislation and raise awareness for the public on the tragedy of gun violence.

Communications lead Catey Terry says they don't want to take guns from people, but legislation should be altered to keep people safer.

"We're about gun sense. We just want laws that make sense to keep our kids and our citizens safe. So I think most people are on our side. When you are in a disagreement with someone you look for things to have in common," said Terry.

"I think if you spoke to any parent across Columbia, Missouri, the United States, what they want for their children is to grow up safely."

One person who could not attend the picnic, but who is a victim of gun violence herself is Ashley Gage of Warrensburg, Missouri.

Gage found her father shot to death in her front yard when she was 18 years old.

Her father was shot and killed by a disgruntled ex-husband of the woman he was dating.

"It changed the whole course of my life. Years of therapy, years of recovery from it. I remember driving around when I was 18 and I couldn't drive around without the doors locked," said Gage.

Gage believed she was suffering from post traumatic stress disorder.

"I had to have all the doors in all of my apartments and houses locked. Going into public I felt very vulnerable, I had a lot of anxiety, it was post traumatic stress disorder. My entire sense of safety was broken down," said Gage.

Gage later on believed the situation allowed her to create something more positive with the tragedy she experienced.

She went into psychology and became a social worker, which later led to her connection to the group.

"From that tragedy I really did want to change the world. That's why I'm really interested in Moms Demand Action. I feel like I can use my experience to testify to the ravages of gun violence," said Gage.