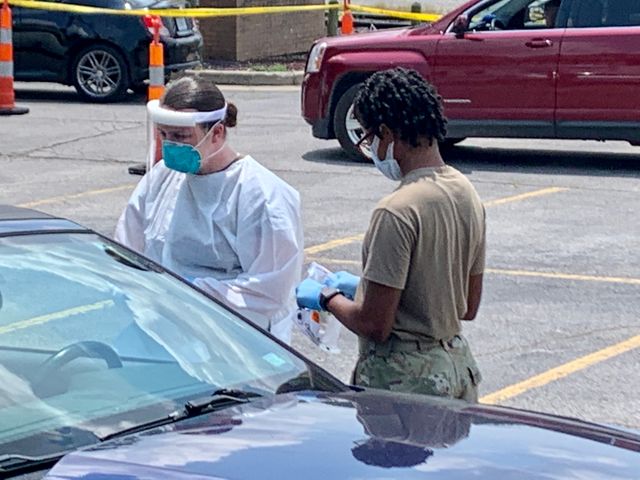 Tuesday was the first day of a three-day event to give out free tests at the former Cole County Health Department building.

"We are helping coordinate with the Cole County Health Department and our good friends at the Missouri National Guard doing 1,500 tests over three days as part of our continuing community surveys that Governor Parson started," Missouri Department of Health and Senior Services director Dr. Randall Williams said.

Testing event began on Tuesday morning and will go through Thursday from 7 a.m. to 7 p.m.

"We've done more than 40 counties and have found it incredibly helpful as we move into our rollout phase here in Missouri," Williams said.

Missouri National Guard administers the tests through car windows and takes the sample to be tested through the Missouri DHSS.

Captain Andrew Rodenberg of the Missouri National Guard has seen a quick turnaround for test results.

"We tell folks one to seven days, but what we've been seeing is about 24-48 hours when a test will come back," Rodenberg said.

Once Missouri DHSS gets the test results, the person is notified through their choice of contact.

"If you have a positive test, what I'm being told is that you will get a call," Rodenberg said. "If it's a negative test, you will choose how you want to be contacted, so it could be through email, text, call."

The tests are administered via a nasal swab through the nasal cavity.

"This is a PCR test, the nasal swab, that tells you whether or not you have the virus in your nasopharyngeal cavity," Williams said. "In other words, if you're actively infected now."

Delbert Stephens was one of the people tested on Tuesday.

"It's really kind of a painful burn when they do that," Stephens said. "I knew it was coming, but hey, it still feels bad."

The community testing event is open to the public.

"You don't have to be symptomatic to come,"Williams said. "If you want a test, we want you to get a test."

The Missouri National Guard medics administered around 500 tests on Tuesday. They plan on taking 500 on Wednesday and Thursday as well.

Any Missouri resident can sign up for a test through the Missouri DHSS online form or by calling the COVID-19 Hotline at 877-435-8411.

The testing facility is located at 1616 Industrial Drive, Jefferson City, MO 65109 and will open at 7 a.m. on Wednesday morning.