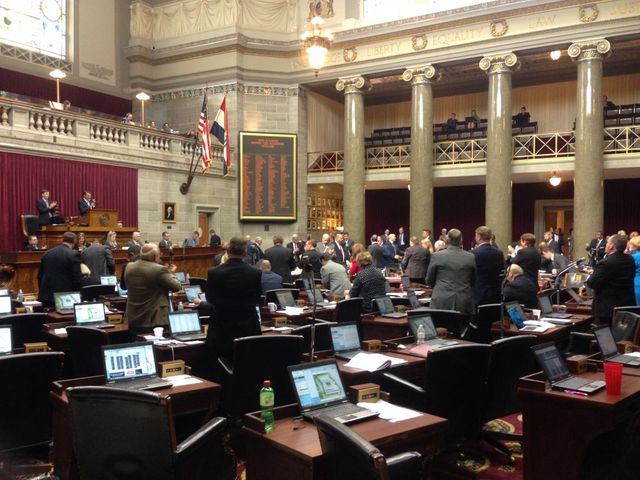 JEFFERSON CITY – The Missouri House of Representatives and Senate voted on Wednesday to override Gov. Jay Nixon’s veto of House Bill 1631, which would require voter ID.

Nixon’s veto letter to the Secretary of State says in part, “Like a similar bill I vetoed in 2011, House Bill No. 1631 would disproportionately impact senior citizens, persons with disabilities and other individuals who have been lawfully voting since becoming eligible, but do not have the kind of government-issued photo ID that would qualify.”

Nixon said, “The bill does nothing to alleviate the time and expense required of Missourians to acquire a qualifying ID.”

Christine Dragonette, of St. Francis Xavier College Church, said the church's program that assists people in acquiring the such identification is one of the only ones in the state to help with the cost and time it takes to get an ID.

“There would not be enough places for people to get help in the long process of getting an ID. It takes a long time for us to learn all the ins and outs and we are not even meeting the needs of the St. Louis area,” Dragonnette said.

Rep. Stacey Newman, D-St. Louis, said, “There are hundreds of thousand of people that cannot get ahold of the required documents and may not have ever had them. We would be preventing them from their right to vote.”

Alferman said, “Even if you don’t have the proper form of identification in the state of Missouri, as long as you sign an affidavit saying you have never been issued one, you can still cast a ballot without an ID.”

Newman said the bill, which is seen as a compromise, is not set in stone.

“Once our Constitution is amended by voters, if the voters decide to allow it, there is nothing to stop the majority party from coming back next year and coming up with new rules,” she said.

Newman said, “We know the underlying reason of this bill is to not allow certain people to vote.”

In a Poltifact article discussing a version of this bill, Sen. Will Kraus, R-Lee’s Summit, said, “There’s over 16 people in the state of Missouri who have been convicted of some type of voter fraud.”

His campaign emailed a report from the Heritage Foundation to Politifact that stated there were 17 convictions since 2005, but they were all convicted of false voter registration, not impersonation, which is the main concern cited by supporters of the current bill.

Alferman said, “Three out of the four ways you can participate in an election, we have verifiable proof that there has been fraud. Why are we so naive to think that in person voter fraud doesn’t happen? It is beyond me. I can point to you in pages of the bill where not a single voter will be disenfranchised.”

However Newman firmly disagrees, “There is no reason for this bill, no reason to cut people out or confuse them.”

Alferman said, “The original resolution, HJR 53, is already on the ballot to vote on in November. Now, if voters vote ‘no’ on the original issue, this House Bill, 1631, will be void.”

Both Alferman and Newman said, “We want every eligible voter to be able to vote,” even though they are on opposing sides.