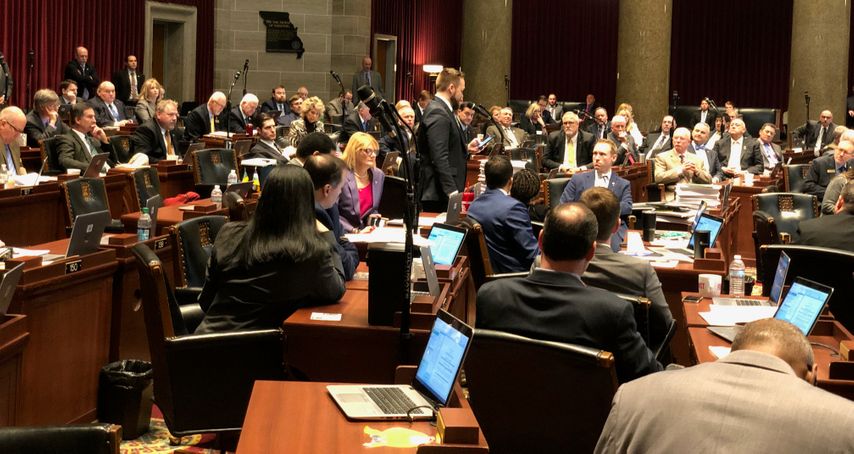 JEFFERSON CITY - The Missouri House of Representatives Wednesday gave its final approval to an abortion bill that Speaker Elijah Haahr calls "the strongest pro-life bill in the country."

The bill bans abortion once a fetal heartbeat is detected, which is about six weeks into a pregnancy.

The bill would ban most abortions if the U.S. Supreme Court were to overturn Roe v. Wade, which legalized abortion nationwide.

In both cases, there is an exception for medical emergencies.

The bill also requires both parents of a minor to be notified prior to an abortion. Another provision prevents a woman from obtaining an abortion because of a screening indicating Down syndrome.

Rep. Nick Schroer, the sponsor, said the bill is the "most sound, comprehensive" piece of "pro-life" legislation in the country.

"Today, we can stand for the unborn by supporting this bill," said Schroer, R-O'Fallon.

Rep. Martha Stevens, D-Columbia, said the bill, if signed into law, would have a "devastating" impact on constituents.

"This essentially is a ban on abortion at six weeks when many women don't even know that they're pregnant, so I think it's going to make it that much harder for women to be able to access care to have their own autonomy over the decisions that they make," Stevens said.

Sen. Jamilah Nasheed, D-St. Louis and the minority caucus whip, said Senate Republicans will have to fight Democrats to get the bill passed.

"We are tired, sick and tired of the Republican Party trying to determine and dictate women's right to choose and the reproductive health," Nasheed said.

Republican Gov. Mike Parson on Tuesday applauded House Republicans "for choosing to take a bold stand to protect women’s health and the right to life."