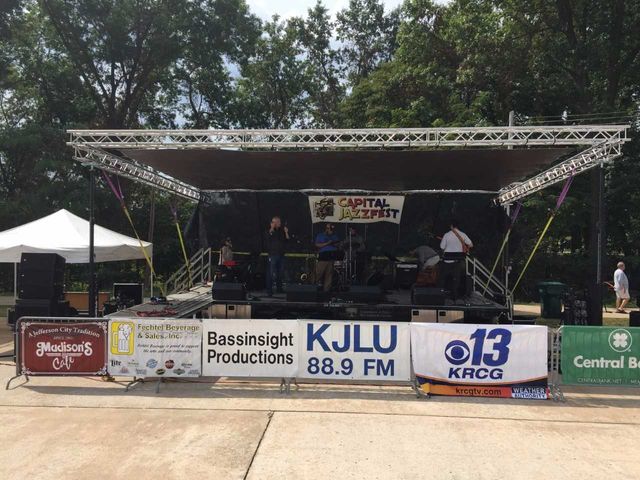 JEFFERSON CITY - The Annual Capital Jazzfest moved to a new location on Saturday.

For the first time the event was located at Riverside Park Amphitheatre instead of downtown.

"We decided to move to a venue that was a little bigger and little bit greener areas around it," said Jeff Bassinson, president of Jazz Forward.

Several people said they were happy with the change.

"It is really a nice change because it gives something for the children to do," said Annette Turner, Jefferson City resident. "There is a lot of trees and it is nice to sit underneath them."

Turner said she has been coming to the Jazzfest for the last 10 years.

The Capital Chalk Art Fair happens in accordance with the Jazzfest and gives people an opportunity to paint and draw anything they want.

"We want to give the community an opportunity to participate in the arts in multiple ways, visually and musically," said Tony Lutz, secretary of Capital Arts.

The event had 120 sections for the public to draw.  The competition is divided by age and ability with winners receiving a cash prize.

Jazzfest organizer Nancy Franklin said being located between Kansas City and St. Louis gives them a great opportunity to promote jazz in Mid-Missouri.

Franklin has helped organize the event for 13 years and has noticed changes with the festival.

"The biggest difference is being focused on Missouri artists which we have a plethora of," Franklin said. "It is very much a Missouri jazzfest."

Four acts performed throughout the event.  Saxophone artist Arthur White performed at the event and loves the way jazz makes him feel.

"I can throw caution to the wind and express whatever emotions that I am feeling," White said. "I can do that better through jazz than any other music that I play."

Bassinson said the event has grown after it dipped in attendance in the early 2000's.

He said it is important to enjoy the ingenuity and creativity that jazz has to offer.

Organizers hope to keep the event free for the public and growing.