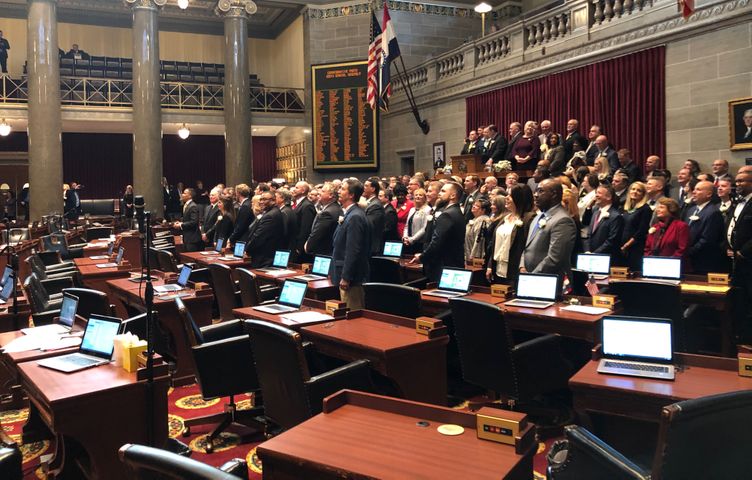 JEFFERSON CITY (AP) — The Missouri General Assembly began its historic 100th edition on Wednesday with a new slate of leaders who touted an agenda focused on promoting good schools and good jobs.

Republicans in charge of the Capitol also encouraged a more peaceable assembly, a year after a gubernatorial scandal and a chain-reaction of resignations resulted in widespread upheaval among those guiding the state.

This year, one of the most contentious proposals could be a GOP-led attempt to undo parts of a new voter-approved constitutional amendment that changed the way legislative districts will be drawn after the 2020 Census. The measure could increase Democrats' chances of winning seats, which hasn't set well with majority-party Republicans.

About one-third of the lawmakers are new for the 2019 session, replacing incumbents who either could not run again because of term limits or chose not to do so. But the partisan composition of the House and Senate remains virtually unchanged after November's elections.

On a largely ceremonial first day, new lawmakers took the oath of office and then elected Republican Rep. Elijah Haahr as House speaker and Republican Sen. Dave Schatz as Senate president pro tem. Both replaced leaders who were prohibited by term limits from continuing to serve in the Legislature.

Haahr promised that lawmakers "will create bold solutions for the challenges" facing Missourians, including those trapped in opioid addictions or what he described as "a broken criminal justice system.

He said lawmakers would fully fund public schools for the third consecutive year and laid out a goal of ensuring every child "gets a world-class education." Haahr later told reporters he didn't have specifics yet on how to accomplish that, but he added: "education is an area we will probably spend a lot of time on this year."

Schatz said lawmakers also must work to "reduce the burden of government" by promoting reforms to taxes, regulations and lawsuit procedures.

Republican Gov. Mike Parson was lieutenant governor at this time last year. He took over as chief executive June 1 when Republican Gov. Eric Greitens resigned while facing potential impeachment over allegations of sexual and political misconduct.

Parson has said he wants to focus on workforce development and infrastructure. But that latter goal will be complicated by the fact that voters in November rejected a proposed gas tax hike that would have raised hundreds of millions of dollars for roads and bridges.

Though they made no mention of it in their opening day speeches, Republican leaders have said they would like to revise a new constitutional amendment that changes Missouri's criteria for redrawing state legislative districts. The measure creates a new position of nonpartisan state demographer to draw districts aimed at achieving "partisan fairness" and "competitiveness."

Any changes would have to be referred back to voters in the form of another constitutional amendment.

The first day of the legislative session included a rare joint session of the House and Senate in order to take a group photo commemorating the start of the 100th General Assembly. The Legislature's terms are numbered in two-year increments, and Missouri is approaching the 200th anniversary of gaining statehood in 1821.