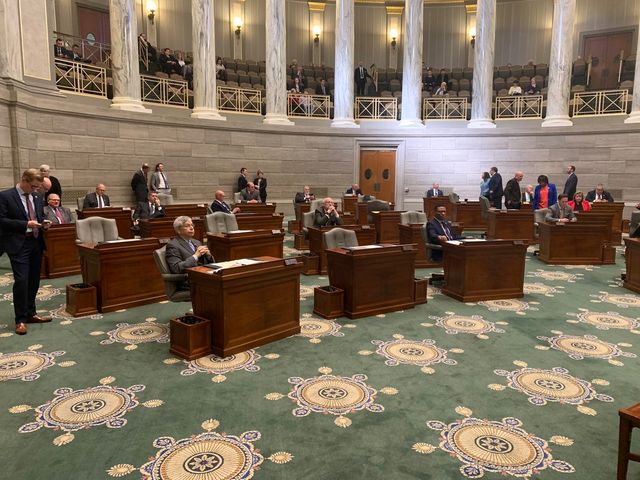 JEFFERSON CITY- Lawmakers came back to the capitol Wednesday for the start of the legislative session with a long agenda of issues hanging over them.

Perhaps chief among the is the redistricting rules as laid out by the Clean Missouri Act. Voters approved Clean Missouri in 2018, which provides that districts were drawn proportionally to the population and does not allow either party to have an unfair advantage.

Republicans like Rep. Chuck Bayse, R-Rocheport, say voters may not have completely understood the issue.

"I don't think one office should dictate how districts are drawn. I don't think that's appropriate," Basye said. "I believe that if we had that in front of the people, that and that by itself, I don't think the outcome would be the same."

Another issue from the 2018 midterms elections that is expected to make a return this Spring is a fuel tax to fund roads and bridges. In 2018, voters rejected a 10 cent increase in fuel taxes.

Less than an hour into the legislative session, Missouri House Speaker Elijah Haahr, R-Springfield, shot down the idea.

“I believe we put a tax on the ballot several years ago and it went down and I don’t know that there is a lot of appetite in our caucus to consider a tax increase,” Haahr said.

He said he wants to continue the conversation despite the speaker's remarks.

"Just because the speaker says it, doesn't mean I'm going to give up on it," Kendrick said. "It's an important conversation to have."

Stevens called the need to fix roads and bridges throughout the state a public safety issue.

“I know people don’t like to talk about raising taxes, but I think we can come to some kind of solution,” Stevens said.

Another highly contested issue in the legislature this year is gun rights. Nearly 30 bills filed this year propose either a restriction or an expansion of gun rights in Missouri, from concealed carry, to storage and possession.

“A lot of the stuff that has been filed we are very interested in like witness protection, ways to help the police department, ways to help the prosecutors, and investigators," Haahr said. "Our caucus as a whole, we swore an oath to the constitution. Anything that we view violates the second amendment we are not going to consider at this time.”

"We need to be having conversations about after school programming, looking at the root causes of poverty and addiction and the things that we know lead to the violence," Quade said. "We need to have a serious conversation about what those changes look like instead of saying oh more kids are dying we are not going to do anything about it.”

With the November election just around the corner, lawmakers may try and avoid more controversial issues. At a press conference Wednesday, Haahr said the Republican caucus won’t follow suit.

“Elections years tend to be less about good policy and more about presentation,” Quade said. “I’m hopeful we can work with the other side to some good, solid policy discussions because there are a lot of things that need to be done.”

Wednesday’s proceedings were mostly procedural with the reading of pre-filed bills and the introduction of new members. House and Senate leaders are still in the process of the assigning bills to committees. Haahr said committee hearings will likely start the second week of session with floor debate beginning the following week.