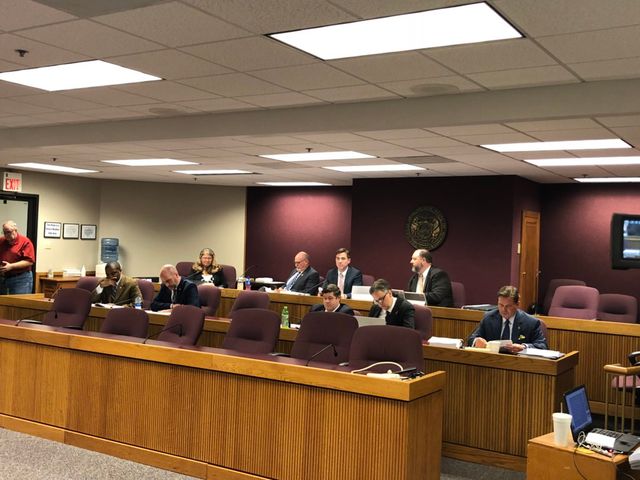 JEFFERSON CITY (AP) - Like actors rehearsing a script, Missouri lawmakers on Tuesday publicly read aloud the previously secret criminal case transcripts of a woman who accused Gov. Eric Greitens of sexual misconduct and asserted that his attorney suggested she should deny it.

The unusual scene played out in a Capitol committee room, livestreamed for the public, as a special Missouri House investigatory panel gathers evidence for an eventual decision on whether to try to impeach the Republican governor in an attempt to remove him from office.

The committee took breaks every 100 pages and ended the session after nearly eight hours.

The bipartisan panel endorsed rules Tuesday that would prohibit Greitens' attorneys from cross-examining witnesses, as they have asserted is essential for a fair process. Those rules would still need approval from the full House.

By reading transcripts of the woman's lengthy depositions taken by Greitens' criminal defense attorneys, lawmakers essentially were working around their concerns by including their previous cross-examination of the woman in the mountain of evidence they will consider.

“I think all the office of the governor is looking for is a process that gets to the truth, and does it in a reliable and open way,” Garber said.

The transcripts were provided in response to a legislative subpoena after St. Louis prosecutors dropped a felony invasion-of-privacy charge last week alleging Greitens had taken and transmitted a nonconsensual photo of the nude woman in the basement of his home in March 2015. It will be up to a newly appointed special prosecutor to decide whether to refile that charge or to bring other charges against Greitens stemming from the extramarital affair that ended more than a year before his November 2016 election.

Greitens has said the affair was consensual and denied that he acted violently toward the woman or broke the law. He has not directly answered questions about whether he bound the woman's hands, blindfolded her, removed her clothes and took a picture as she has alleged.

Lawmakers read aloud the transcripts of the woman's two grand jury sessions from Feb. 18 and Feb. 22, the day Greitens was indicted. The committee decided to not read the explicit language during the hearing. Her account of events tracked closely with her eventual March testimony to the House committee, which already has been made public, but it contained at least one apparently additional element.

The woman, identified as only as K.S., told grand jurors that an attorney for Greitens had called her attorney in January, shortly after news of the affair broke, and asked what she wanted out of it. When her attorney said she didn't want to be part of this, the woman testified that Greitens' lawyer responded, "Well, I know a way that she could do that. She could come out and say that none of this is true."

Greitens' attorney, Ed Dowd, told The Associated Press on Tuesday that the testimony was "double hearsay."

"We never gave her any suggestion of what she should say," Dowd told the AP.

Lawmakers later began reading the previously secret transcript of the woman's April 6 deposition taken by Greitens' attorneys. The lawyers began that interview by trying to portray the woman as a liar — a label she rejected while acknowledging that she for a while had not been truthful with her husband and had lied to Greitens by telling him she hadn't told her husband about the affair.

In her grand jury testimony, the woman said she was afraid of Greitens' reaction if he found out she had told her husband. She said Greitens is "kind of an aggressive guy."

Lawmakers took turns reading the parts of the woman, prosecutors and defense attorneys, often speaking with inflection as though they were characters in a theatrical play.

Greitens' attorneys said that simply reading the transcripts wouldn't satisfy their desire for a public cross-examination. They noted that rules for impeachment procedures in several other states did allow cross-examination of witnesses, though Missouri lawmakers also barred it during their last impeachment of Secretary of State Judi Moriarty in 1994.

"All the office of the governor is looking for is a process that gets to the truth and does it in a reliable and open way," said attorney Ross Garber, who his representing Greitens' office. By not allowing cross-examination, he said, "the public will not have confidence in either the process or the results."

By contrast, some lawmakers raised concerns that allowing the governor's lawyers to call and question witnesses during legislative proceedings would infringe on the state constitution's separation of powers.

"So I don't think the cross-examination would be much more than probably just an attempt to almost filibuster our committee, for lack of another way to put it," said Phillips, the panel's vice chairman.

In addition to sexual misconduct allegations, Greitens faces accusations that he misused a donor list from The Mission Continues to raise money for his gubernatorial campaign without the permission of the St. Louis-based veterans' charity he founded.

During a brief court hearing Tuesday, a judge scheduled Greitens' next court appearance for July 2 on a felony charge of tampering with computer data for allegedly disclosing the donor list to his political fundraiser in 2015. A Greitens' attorney said the delay could allow time for a grand jury to issue an indictment superseding the original charge, which is standard procedure.