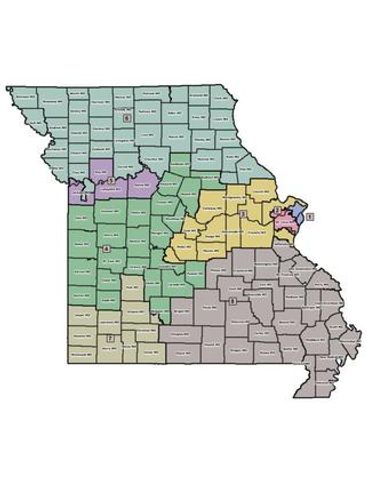 JEFFERSON CITY - The Missouri House and Senate reached a compromise Wednesday on new district lines for state congressional districts. The bill is now on Governor Jay Nixon's desk. According to the state constitution, Nixon has fifteen days to sign or veto the bill.

Currently, Missouri has nine congressional districts, but the state is losing one due to slower population growth than other states. The legislature needed to redraw the district lines to take the state down to eight districts. If Nixon signs the plan, Republican incumbents could run in six of the eight new districts, compared to the six of nine they now hold.

According to Senate redistricting chairman Republican Sen. Scott Rupp, redistricting was logistically difficult because all of the districts needed an approximately equal number of constituents.

"We had to go from nine to eight districts, so we had to absorb the population of losing a district. Then you had to look at the dynamics of the population shift across the state," said Rupp.

But not everyone is happy about how that difficult process turned out. Representative Joe Aull (D-Marshall) has challenged the constitutionality of the bill. He said the lines were drawn for political reasons and not for the best fit for the consituents.

Aull said he is worried that urban and rural areas are being grouped into the same districts.

He said he hopes the governor will veto the bill, and that it will move to the courts.