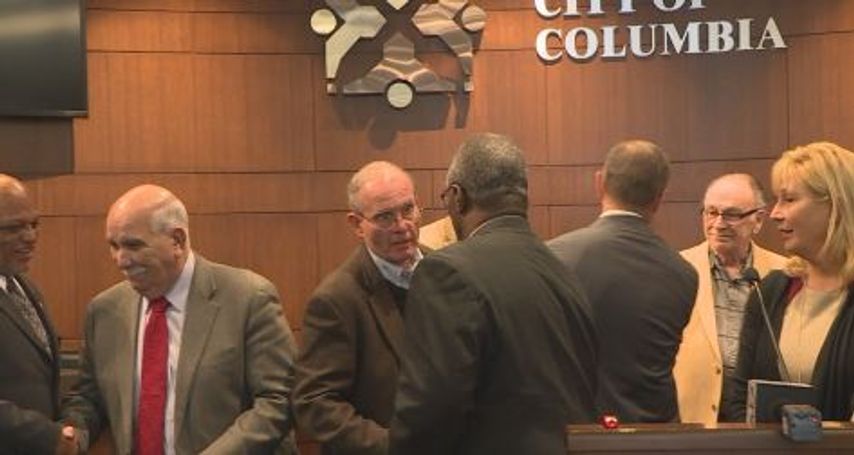 COLUMBIA - Mayors from across Missouri met in Columbia Monday to discuss a variety of policies they say are negatively effecting their communities.

Thirty-seven mayors attended the forum and discussed issues including transportation funding, phone use while driving, and low-income housing tax credits.

Missouri Governor Eric Greitens supported the rejection by the MHDC in a statement.

"This is not a giveaway, this program is a lifeline for people who need it," James said.

Twenty mayors signed a letter asking the MDHC to reverse its decision, including Columbia's Brian Treece.

"Before you get a job, you need a place to live and hang your clothes," Treece said. "This is a necessary program and if there is a problem with it, they need to amend it, not end it."

"Right now, we are forty-seventh in revenue collected at the fuel point and we have the seventh most highways to maintain," Florissant Mayor Tom Schneider said. "That is not a good combination."

Among the proposed solutions were a ten cent increase in fuel taxes and a new licensing tax.

Schneider said that with many people travelling home for the holidays, it's an important time to remind people of the danger of texting and driving."

James said the mayors were called to action amid concerns over current state government proceedings.

"Mayors have the best job in the politics because they actually do stuff," James said. "You can't actually go a year without doing something. We want to provide services at the lowest possible cost level and at the highest level of efficiency and quality to the people we are responsible for. That's all we do, that's all we want to do, and we need the state's help in order to get that done."

Jefferson City Mayor Carrie Tergin said meetings like this with a large group of Missouri mayors are important to establish statewide communication.

"When we work together with mayors from all around the state we get to learn what are the issues, what is working and what isn't, and how we can better work together," Tergin said. "Collaboration is the key in that so that we can hear what is effecting cities big and small, especially being the mayor of the capitol city."