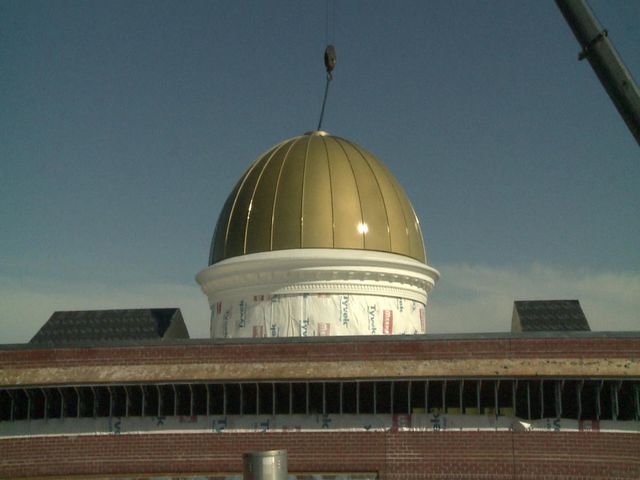 The new gold dome replaced the silver one that rested on the former administration building that was torn down in 2011. "I think it's an excellent gesture to the vision of the future," alumni Rick Frahm said.

"One of the most impressive things when you come to MMA is as you drive in on the front campus. I think more than anything else, when you look around at the physical plant, I think the one thing that came to mind was ‘I want to a part of this,'" alumni Raymond "Dude" Stotlar said.

Major General Robert Flanagan said the building and the dome stand for more than visual appeal. Stribling Hall is LEED certified. LEED (Leadership in Energy and Environmental Design) certification means a building is energy and water efficient, as well as helping the environment through low carbon emissions needs.

Stribling Hall is the second building at MMA to be LEED certified. The academic hall, Barnard Hall, was the first. In 2009, the certification of Bernard Hall made MMA the first LEED-certified high school in Missouri.

"We hope the dome and the building will become a landmark, not just to the academy, but to the city of Mexico" Flanagan said. "We hope it stands for another 110 years."