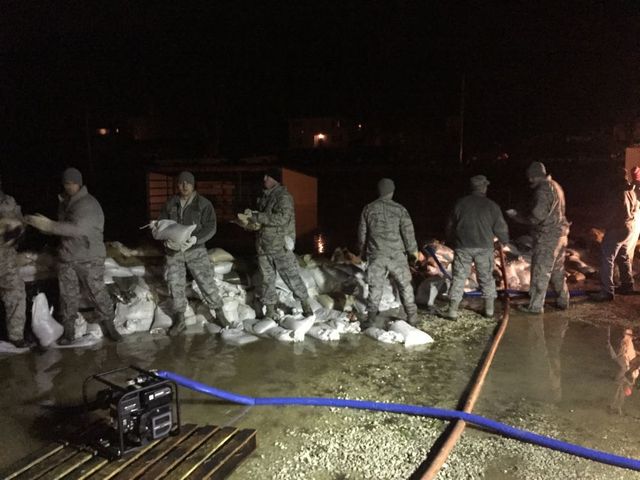 JEFFERSON CITY - Gov. Jay Nixon has mobilized the Missouri National Guard in response to flooding in the state.

In a recent Missouri National Guard press release, the force said it is mobilizing a task force with hundreds of soldiers and arimen across various locations. Maj. Gen. Steve Danner, adjutant general of the Missouri National Guard, said the service men and women are providing defense support and focusing on keeping people safe by protecting property and maintaining public order.

Missouri National Guard liaison officers are on the way to emergency operations centers in Perry, St. Charles, Cape Girardeau, Jefferson, St. Louis and Franklin counties, where the flood stage of the Mississippi River is expected to exceed the 1993 record levels in the coming days.

Adjutant Gen. Steve Danner told KOMU 8 News the National Guard got in Monday afternoon after flying over several counties including Franklin and Jefferson with Gov. Nixon.

Danner said the Guard will work with the Highway Patrol and emergency management agencies.

"We can do security and wellness patrols and work with our engineer companies in sandbagging," Danner said.

Danner said the first crisis the Guard is working on is saving the High Ridge Water Plant Tuesday night.

"Now we are looking to bring some of our water units to help with the need for potable water," Danner said. "I think there are about 20,000 folks there without water."

He said the Guard's other principle mission will be security and health patrols throughout neighborhoods.

"We're going to be in at least the next few days until we see the river levels start to level off and we see what is required of us by local officials," Danner said.

Danner said he believes the recovery process of homes and businesses will last days, if not weeks.

"I know the Governor is very concerned about being able to get communities in eastern Missouri back on their feet as soon as possible," Danner said.

The Missouri National Guard said hundreds of roads have been closed and 124 spots along Missouri rivers are in various flood stages.

The force said Missouri’s citizen soldiers and airmen will continue working in support of local authorities until released by the governor. The Missouri National Guard has a total force of more than 11,800 members.

Over sixty percent of the Missouri National Guard are combat veterans of Iraq or Afghanistan.

"The Guard is always ready, always there, that's why we do what we do, we have a state mission and a federal mission," Danner said.

[Editor's Note: This story has been updated with information from an interview with Gen. Steve Danner.]