Missouri Out Kicks Baylor to Advance to Semifinals 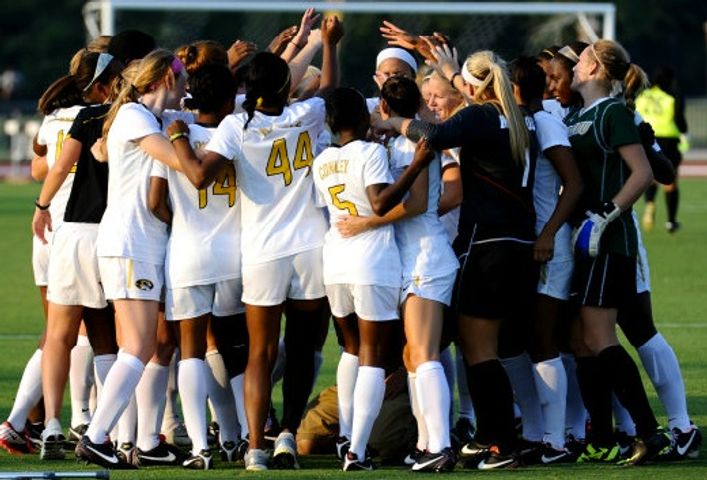 SAN ANTONIO,TX -- Missouri got scores on an own goal in the first half and a game-tying penalty kick in the second half, and goalkeeper McKenzie Sauerwein's score in the penalty-kick round gave the Tigers a victory over Baylor in a Big 12 Soccer Championship quarterfinal match on Wednesday at Blossom Soccer Stadium.

The game ended tied 2-2, but the sixth-seeded Tigers (13-7-0) advance on penalty kicks 4-3. Not only did Sauerwein score the winning penalty kick, she had a stop in the penalty kicks and watched as another Baylor attempt kick sailed wide. Baylor (14-4-2) was seeded third.

Sauerwein, a redshirt freshman from North Richland Hills, Texas, has not taken a penalty kick for Missouri this season.

"Yesterday we were working on P-kicks," Sauerwein said, "and I made four out of four and the coaches were like ‘Dang, McKenzie, are you ready to take one?' When I told them I was they were like ‘The pressure‘s on because you‘re going to be No. 5 (to take the kick).'"

Missouri plays next in the semifinals on Friday at 8 p.m., against the winner of the Texas A&M-Kansas match played later Wednesday.

The own goal put Baylor down 1-0 just 18 minutes into the game. Abi Raymer, a freshman from Victoria, B.C., laid out a pass from the left side for Danielle Nottingham just outside the goal box. It was long and crossing into the box, but Bears' defender Hannah Dismuke kept after the ball. She slid and got a foot on it, and rather than sail over the crossbar the ball went right into the net past Bears goalkeeper Courtney Seelhorst.

And, after Baylor scored twice on goals from Lisa Sliwinski and Hannah Gilmore to go up 2-1, the Bears let the game-tying goal through on a penalty kick in the 65th minute. Dominique Richardson got the freebie, her second penalty-kick goal of the season in as many tries, but it was set up when Bears defender Carlie Davis was called for a foul in the penalty box on Alyssa Diggs.

"Those are run-of-the-play things. Those things happen," Baylor coach Marci Jobson said. "You're not really disappointed in those plays. They weren't mistakes where they weren't trying hard.

"It's more of a bummer to lose on penalty kicks at the end. You feel like you just got punched in the gut."

The first tie in the game came when Baylor scored with 27 seconds to go before halftime to make it 1-1. The Bears had entered the zone with the ball high in the air. It came down and bounced off Taylor Heatherly, who had fallen down to the ground. That practically teed it up for Sliwinski from about 15 yards out and directly in front of the goal. Sliwinski drove it home past Sauerwein for her eighth of the year. That made it a different game, coming in the last few seconds before Missouri could have made it to the break and entered the second half with the wind at its back.

Gilmore's score, her fifth this year, came on another odd play in a game highlighted by them. The Bears had a long throw-in that bounced over Vic Hoffman's head but landed right in time for Gilmore, who quickly slammed it down and through Sauerwein.

After Richardson's penalty kick goal tied it in the second half, the teams went through 45 minutes of scoreless soccer. It led to the 11th time penalty kicks have been used in Big 12 tournament history.

It was a bitter turn for a Baylor program that posted its most single-season wins since 1998. The Bears went 15-5-1 that year and were undefeated in conference play before losing in the first round of the Big 12 tournament. Baylor's last time in the semifinals was in 2000.

Baylor hadn't played in 10 days. The Bears were on quite a roll before the long break, recording a 8-1-1 slate to finish the season.

Missouri split the final four matches of the regular season, the losses being a 3-1 defeat on October 14 at Baylor and a 1-0 home loss Friday to Iowa State in the last regular-season game of the year. Iowa State was the only team not to qualify for the post-season tournament.