Missouri pig museum looks to be the world's largest 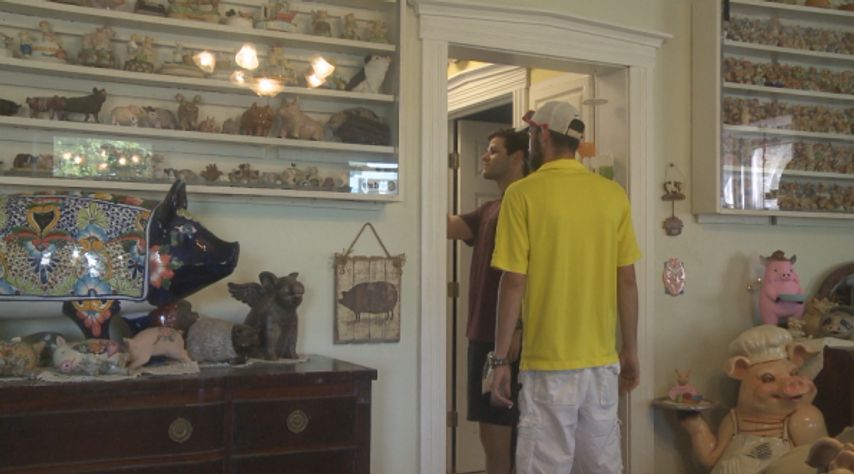 COLUMBIA — A Missouri farmer is close to having the world’s largest pig museum.

Cindy Brenneke is the owner of Where Pigs Fly Farm in Linn, Missouri. The farm is open to the public every Wednesday through Sunday.

But Brenneke will be the first to admit this wasn’t her life plan.

“I moved off of the farm and swore I would never go back and my little brother always told me, 'oh you’ll be back' and I always said 'when pigs fly,'” Brenneke said.

The farm is also home to the United States’ only pig museum. It is currently the second largest in the world, next to one in Germany.

But Brenneke has big plans for the museum.

“I anticipate that, by the end of the year, we will probably have the largest in the world,” Brenneke said.

After her farm was featured on an Arizona radio station, Brenneke got her first donation of collectible pigs from Ross Honsa’s family.

“He had gotten cancer and passed away and his dying wish was for his collection to go somewhere that the public could view it,” Brenneke said.

At the time, Brenneke lived in Owensville, Missouri. But as the pigs kept flying in, she realized she needed a bigger farm.

Initially, she did not want to move.

“I was like 'oh no Lord I’m not moving all these pigs,'” Brenneke said.

But five days after saying that, she had an approved loan and signed off on a contract to buy her current farm in Linn.

Now Brenneke hopes her farm and the museum is honoring the Honsa’s wishes.

The museum has travelers from across the nation and its volunteers are pleased to see visitors enjoy its uniqueness.

“Every time, for as many times I’ve been out here, every time I see something brand new,” volunteer Aaron Richards said.

The museum currently has more than 30,000 different types of pigs, including some from the Babe movie's pig collection. Brenneke has had donations from all across the country, from Oregon to Maine.

Germany’s pig museum currently has a little over 42,000 different pig artifacts. Brenneke is expecting donations later this month from Indiana to help her get closer to overtaking the one in Germany.

[Editor's Note: A previous version of this story incorrectly named a volunteer Aaron Stephens. The volunteer's name is Aaron Richards.]