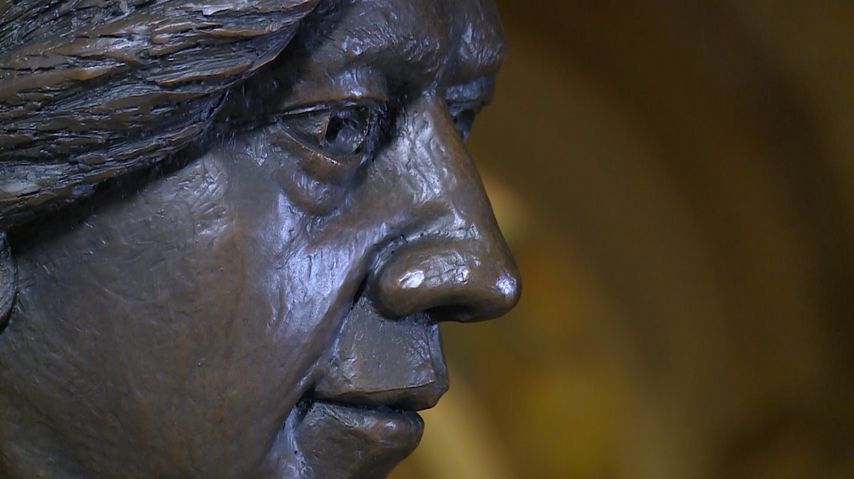 JEFFERSON CITY— This year marks the 100 year anniversary since women gained the right to vote in 1920.

“She was the first, female county clerk in the nation that was elected, first female in Missouri elected,”  Haahr said. “I want them to sort of see, this was how the women's suffrage movement in Missouri sort of came to be.”

Haahr inducted Baxter into the Hall of Famous Missourians on Aug. 26. There are nearly 50 bronze busts in the hall, and Baxter is the ninth woman to join the illustrious group.

“I've got three little girls,” Haahr said. “And they'll grow up, they'll never think about not being able to vote, not being able to serve on a jury, things like that, [it] is because of people like Annie White Baxter, who ran for office and got elected to office 30 years before she could even vote for herself. That, sort of, is the reason that my daughters get the right to vote and don't have to think about it if [they] don't have to.”

Baxter became the Jasper County Clerk in 1890. Now, woman make up the majority of county clerk positions across the state.

"So, she paved the road for so many other women to be able to move into that position,” McGaugh said.

McGaugh was the Carroll County Clerk and now represents the first 39th district. She is the first woman to represent the district.

“I think there's a lot of women like me out there that might be a little timid to put their name on the ballot,” McGaugh said. “And I would certainly encourage them to try because it is a very fulfilling position.”

According to the Center for American Women and Politics, Missouri ranks 40th in the nation for proportion of women serving in state legislatures.

This year, 24.4 percent of the state legislators are women—a percentage that has never raised above 25 percent.

The Women’s Foundation CEO Wendy Doyle said that women are severely underrepresented at every level of government, including at the state level in Missouri.

The foundation funded civic engagement research through the University of Kansas. The research showed “Women who have not served feel that they don’t have the knowledge and expertise needed, and feel less confident in their leadership skills.”

“That solution is working to get women appointed to boards and commissions at the government level; at the city, county and state to really start to build confidence in women who may want to go on and run for elected office,” Doyle said.

In Missouri, State Auditor Nicole Galloway is the only woman state office holder, and there has never been a female governor in Missouri.

Haahr said this should change.

“We continue to sort of find all these places where women have not served before, and they get the chance to serve now,” Haahr said. “But you know, obviously a female governor would be would be the next big step.

Haahr does not back Democratic gubernatorial nominee Galloway in her run for office. He supports Republican Governor Mike Parson. He said there are “a lot of incredibly talented Republican women in Missouri,” and he hopes to see one of them in the Governor’s mansion eventually.

“We've moved in such a way that I don't think it's considered abnormal for women to be running statewide and sort of to be competitive in the front runners in these races, again, standing on the shoulders of those who ran for them,” Haahr said.

And the shoulders of Baxter will forever be represented in the Hall of Famous Missourians.

“She's such an inspiration, you know, again, not even being able to vote, overseeing those elections,” Doyle said. “And being the trailblazer that she was. She's finally getting the recognition she deserves. That's the inspiration for me.”

The Women’s Foundation supported Baxter’s induction for over a year and helped raise donations for her bronze bust.

“It's important for us because we really feel that people need to be able to see who they can become, especially young women, girls, that we really want them to see aspiration in leadership,” Doyle said.

“It shows what women have started with and where we are now with the number of women involved in local government, and [it] also helps motivate us to continue with our progress,” Lennon said. “We still have a ways to go when it comes to gender equity, and it's a good reminder that we should continue fighting.”